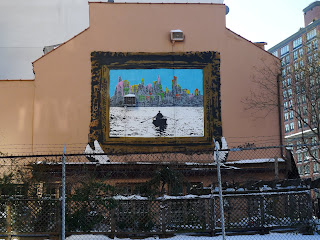 Some truths only speak from the well of exaggeration.

As is usual I was only trying to make a point with last night's post.  We all know that humans are evil and selfish, incapable of untainted generosity, love and gratitude. I had only thought of experimenting with a fictionalized definition of the world.  It was a silly indiscretion.  I blame the blizzard, Christmas, love, etc.

It is interesting that certain emotions can only be expressed when accompanied with (and buffered by) doubt.  There is never any implicit need to buffer doubt or suspicion in this same way, only benevolent emotions are suspect and in need of correction or augmentation. Suspicions and criticism are allowed to run free in the heart and mind unquestioned.

Or worse, the only way to question doubt is with an increased level of doubt, an advanced criticism of criticism.  This is the joy of solipsistic thinking as it spirals ever inward on itself.  Why bother knowing another, or believing another to be knowable, the self is all there is?  Mistrust all sentiments unless they confirm, or at least acknowledge, the evil of the world and the darkened heart of man. The very idea of doubting doubt strikes the literary mind as shameful, or callow and naive.

A teacher I once had relayed a thought to me, it was something to the effect of: freedom is the feeling one gets when they're not aware of what is truly controlling them.

This thought has been with me ever since and it has proven to be very useful when considering certain things.  But we all like to feel free sometimes, so I also try to be aware of moments when it is best to not repeat this line to myself, or focus on it, or relay it to others as they are experiencing the feeling of freedom themselves. Like when Barack Obama won the election.  But a healthy doubt about all things will also only get you so far, there comes a time when it inhibits experience and certainly acts as a retarding agent on the enjoyment of that experience.

Now, I would never reprove any honest use of the intellect, but intelligence is arguably not all that we are. Intelligence can be self-limiting when misapplied, though very few who believe they possess any of the stuff will ever attack it as limiting. The modern mind is educated to believe that analysis is supremely expansive and intellect boundless.  So, try openly discussing the implications of Heidegger with your friends sometime....

When I say that very few will attack intelligence, I mean their own.  The intellect of others is worthy of all the doubt that the human mind can muster.  Intelligence is self-correcting only to a point, that's what makes doubt so useful.

Ah, the freedom to doubt....
...the silliness to believe.


What does one call the feeling one gets when they are aware of what is controlling them?

Doctrine is not thought, it is the retreat from thought.