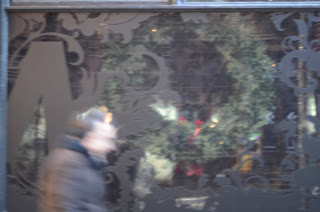 My wife told me that for the last few days my blog has been "lewd."  I went back and checked, she is quite right. I'm not sure how it happened, a door opened, and I slipt past unawares.  So there will be no lewdness today. Just good old-fashioned bloginess. Women have such a naturally civilizing influence over men, at times.

We are both headlong into The Count of Monte Cristo, though we are also both a little frustrated with it.  This book is where an entire lifetime of events occur by nearly perfect and uncanny coincidence.  A mysterious and magical land where all things happen in polarized ethical tandem. A world filled only by the good or the evil.  It feels like it was serialized in a magazine in the mid 19th century, etc.  Only 900 more pages to go.... I will keep you posted.

Almost every day I eat lunch at a Japanese Supermarket on Broome St. called Sunrise Mart.  I sit near the window when I can and try to ignore the traffic that waits impatiently for the Holland tunnel, asserting their liberties with unceasing noise and purely American disregard.  But... as I sat there yesterday I realized that there really is no such thing as a "norm" for wasabi paste. There is no accepted global standard regulating wasabi heat and preparation, no international summit to determine acceptable spice-root levels.  I wondered if it was a spice or not. I know it's a root.  I remember it being called "Japanese horseradish" when I lived in Florida.  I believe that certainly qualifies it as a spice, by all global standards, and as far as Floridian euphemisms go... Is it euphemism or colloquialism?  Probably neither.

I wish my wife were here to correct and inform me, to further civilize me... No, I'm kidding. She's great and knows more than me about food.  I don't need to know as much about diet as I have a far wider acceptance level for what I'll ingest and digest.  She is a vegetarian, though I call her a lipstick-vegetarian, she'll eat meat when she feels like it, though not usually pork or beef.  She will rarely order meat for herself, she'll just try a bite of whatever I've ordered as soon as it starts to looks good. Only one or two of my girlfriends has ever not been a vegetarian, they are closing in on me with cultish precision, these vegees...  I'll be singing civilized celery praises before it is all over.

The second snow fell in NYC last night.  This time it survived on the ground and made everything brittle.  I rode my bike home in it, something I will avoid in the future.  The snow stung my face as I rode through it. It made the roads just slightly treacherous, enough to concern me, as I had my brand new camera in my bike-bag and envisioned all sorts of destruction, pain, mayhem and tears. 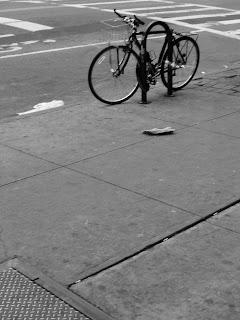