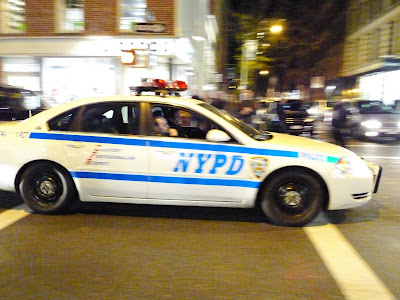 Jesus, I tried to write a blog entry, to tell a story, and it's a mess. I couldn't even understand what I was writing about. I don't think I had been drinking when I wrote it, but it's just a confused set of incoherent fragments that's supposed to tell a pretty basic story. I will go back to it at another time, when I have more strength, and try to fix it. Or I will just give it up.

There is nothing much new to tell in my life. It seems that everyone on the face of the earth has the Nikon D7000 now, except me. I paid for it a few weeks ago but am still waiting to get the email that mine has arrived. Boring.
Ok, just after I took the picture above the cop glared at me as if I had no right to take it and he was considering jumping out of the car and pistol-whipping me, but he didn't.
I have become a little bit self-righteous about my right to take pictures out in public. I still have no idea what standards there are to govern photography in public, but I fall back on the idea that it is my constitutionally granted right and I act accordingly, with a self-certainty that would annoy any of the founding fathers.
A big leak of government communiques has occurred on WikiLeaks, a website whose sole purpose seems to be to embarrass the evildoers of government. Don't get me wrong, some of the leaks have been important for people to see, but I have mixed feelings about it.
Part of me thinks it's great and a necessary component of democracy, the free press. Another part of me hates all of the people who think it's so great, that in reality they can't admit that they secretly hate America so they must have others perform and act out their hatred for them. That last sentence is not a joke. I honestly believe that much of that sort of behavior is just thinly disguised hatred of western culture, self-guilt from long-term apathy, and confusion about the usefulness of media in the era of the internet. It is an anonymously titillated culture. Everyone gets to be a one-sentence hero.
All governments are corrupt and I don't expect them to act with the morals of an individual. They don't and can't act as an individual. They have the interests of many to consider and all of the safety precautions that can be put in place (due process, human rights declarations, systems of justice, division of powers, etc., etc.) can only prevent the abuse of power to a certain degree. At some point the "checks-and-balances" precaution fails because it is too difficult to check, crimes too easy to be hidden, and there is only a semblance of balance. One need only look at the last 10 years in America to confirm this last assertion.
Ultimately, I want my society to survive, though I'd like to see it survive with dignity, which seems out of the question at this point, but I'd still like to see it happen. I don't want my society to survive at the demise of another, but the division of the world into nation-sates and modern economics are not a very hopeful business.
Ok, I don't know where I'm going with any of this. It is late and I'm not taking the time to make my points well.
I think that cops have way too much power. I think that's a bad sign in general.
I think the media is largely misguided when it comes to its role in maintaining freedom and justice.
I think the audience for developed dialogue in this country is slowly diminishing. People are reading less and consuming far more visual media, which by its very nature contains less ideas, and is more prone to the veiled and hidden subjectivity of unseen editorial selection. At least with the written word the subjectivity of the author is more readily apparent and can be consumed and understood as such.
I think most people are experiencing corruption fatigue.
I think I need to go to sleep.....
Posted by Sean Q6 at 8:50 PM