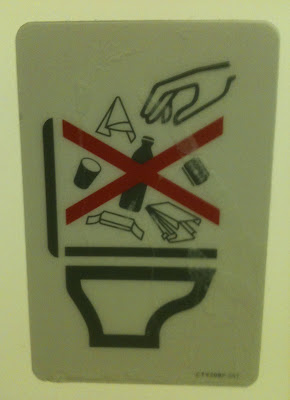 When on a flight... please don't throw away your hand, or anybody's hand. Though when throwing things away it seems that a hand is best to throw away last, accordingly.
Also, that big red X is never going to fit in the toilet anyway. That is somewhat self-explanatory. Who brings a big red X with them on a flight, then tries to ditch it in a toilet?
I wanted to paint something over the razor, as the times they have changed, but I was quite unprepared, this time...
Of all the things that seem wrong about this sign the one thing they got perfect was the size-ratio between an actual human hand and an airline toilet. It almost looks as if they're suggesting that it is a magic hand, somehow holding all of those objects floating in place above the toilet with some unnamed sorcery. I tried several times to duplicate this action but was thus far unsuccessful.
Is there anything that combines "weird" and "good" quite as well as flushing a toilet seat while on a cross-country or trans-oceanic flight while you're still sitting down? It is both exhilarating and frightening, yet it's over so fast you really don't get to experience enough of either feeling. It's happening at the perfect place on your body, nowhere else really compares, I've tried. If you think a hand won't fit into that toilet, try getting your face near it… But, the airline hosts really do get quite mad if you just sit there flushing the toilet for hours, giggling.
I know.
Posted by Sean Q6 at 9:01 AM