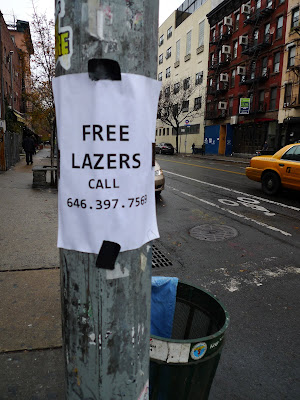 I am bubbling with hardly containable interest. Keep in mind that I am still the #1 Google hit for Laziest Nerd Ever , the unchallenged champion of the cause.
Nope, scratch that. I was the #1 hit for a long time, but no more, I just checked. I think it has something to do with the way Google archives the blog. I guess when something's free, you get what you pay for.
I am tempted to call the number on the ad, but am old enough to understand how these things generally work out, with a sales pitch. I forget how to block my outgoing number, so this lazer distributor would have my cell phone number, something that I can not allow.
I couldn't find much information on "lazers"... on lasers there is quite a bit, but not too much solid data on ones with the "z" spelling. There is a place in France, a car made by Panther, a few radio stations, a soccer team, and some youtube videos... that's pretty much it.
Is it a political prisoner, this "Lazers", wrongfully held....? Should we be marching in the streets for Lazers, demanding justice?
A 646 area code generally means a cell phone here in New York.
The temptation is strong.
Free Lazers, call 646-397-7569

Update: I'm back on top. I did another search for "Laziest Nerd Ever" and there I was....  I have no idea how long I'll be able to keep that title, but there doesn't seem to be too many contenders in sight....
Posted by Sean Q6 at 8:37 AM