Partners in Crime and Punishment 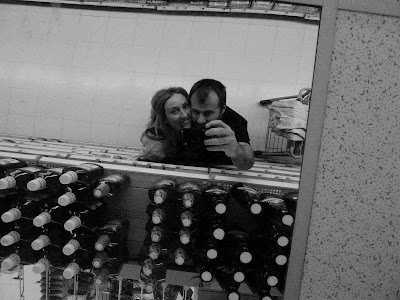 Last winter Rachel and I read a few books together. The main one was Dostoevsky's, "Crime and Punishment." We were hoping to read another book or two this winter. It is a private and nerdly endeavor but it's been fun for us. The winters can be cold and long here, they are survived best with books. With a larger group of close friends we had also decided to read Proust's "In Search Of Lost Time" but I was the only one who made it through the 1st volume. I was going to try to make it through the 2nd volume this winter and see how things go. Perhaps by 2016 I will have completed the series. In search of time indeed.
I took the picture above at the K-Mart at Astor Place, in one of the many security mirrors that litter the ceiling of any and all places like that. I love the grainy, crime-like feel to it. The snapshot taken before the crime and subsequent getaway attempt. Though no crime was committed that day, I do believe we bought some mouthwash, toothpaste and deodorant. Socks, always.
This winter we were thinking about reading "Moby Dick." I've read it before but it is one that I would gladly go back to. I used to work in a record store and I would lie on the couch there all day reading. When I wasn't just lying there gazing at the ceiling, tussling with space-spooks, I could read a book very quickly, sometimes one a day. It was a store that specialized in electronic dance music but I would put on the entire Miles Davis box set of Bitches Brew and scare the shit out of the young dopey kids that would come in to buy cheesy breakbeats. I was Mean Mr. Mustard. I was the character 'Barry' played by Jack Black in "High Fidelity"...
Rachel and I also talked about "Bleak House" or a re-reading of "War and Peace", perhaps a strong Russian winter theme would work, though Tolstoy's novel includes all four seasons as a theme that runs through it. I remember that from the Norton Critical Edition notes I read, I might not have been as aware of it on my own. I try to supplement the classics with some notes. I've grown used to not making too many assumptions about all of my own observations in reading.
I suppose I really should shoot for a book I haven't read yet, there are many. It is nice to put another classic behind you, a fading enterprise it would seem. There is much talk at work about the fading industry of print. I work for a technology company so much is said about such things. Many see it as a victory of sorts. The triumph of product. Some speak of it in somewhat sad tones, the acknowledgment of loss. Others deny this and say that nothing has changed, that the text is the text is the text... Few of these conversations interest me. Though the thought does occur to me occasionally that I should stock up on books that I want to read from print so that, at the very least, I will have them when I am ready.
I like the way the light reflects softly off the page. I like holding the book in my hand and turning the pages. I like reading the way that I discovered it in my youth. I shoplifted almost every single book I've ever read, though that was mostly when I was much younger. There was a thrill involved with it. I romanticized all things then, especially the illicit and illegal. Most of those stolen books I still have, though many were lost. Some of them I was forced to throw away. They were stored in the garage and had become a fire hazard, or so it seemed.
I don't want to be paranoid but maybe stocking up on un-read classics now is a good idea. If the publishing industry goes through similar changes that the music industry did as a result of digital technology then perhaps there will come a time when the prices of books skyrockets as a means of counter-blancing losses. Industry will use whatever excuse possible to justify aggressive increases. I know.
One must always prepare for the future crimes of others.
Posted by Sean Q6 at 8:38 AM