There is no escape from politics. It dominates everything now. I wish to retreat into music or literature or art, but even there it finds a way to creep in to my inner monologue. We live in terrible times. It doesn't seem that we will be free from our pseudo-elected leaders anytime soon. Yesterday, I wrote a post but couldn't find a fitting image, so I let the post sit, where it began to rot. I couldn't bring myself to publish it. Everything smells of stale feces, a zoo that needs a rainy season followed by a long period of sunshine.

America seems to be getting what it deserves, a celebrity outsider as its contested spokesman. Almost everything that is rotten about America, from repressed racism to naked greed, has risen to the surface where it can fester.

Middle age must be the feeling of recognition that there are no paths back to youth. The so-called spokesman seems to have sealed off the passageways once used to regress into delightful immaturity.

Ah well, middle age is not so bad, if you can ignore the nearly perpetual whining and body aches. My own, I mean. I only wish to be happy, to feel happiness, to feel loved. To give the same. Life is too detailed to sustain simple pleasures for very long. It is easy to become distracted, far easier than maintaining focus on something that neither requires nor requests it. I want to return to a life of being, the doing can always follow.

I have started jogging again, to try to silence the inner voice of cycling. Something has changed about the voice I use when riding. It has become a nuisance to me. Too much time wrapped up in inner silence. Not the good, meditative kind, but rather the spiraling voices of self-questioning and doubt. Fear.

I suppose that the past year of exercising has had its benefits, but now I have acclimatized to these new feelings of healthiness. My fluctuating pattern of emotions has finally caught up with me. The new normal feels like the old normal again. Health becomes just another almost arbitrary component to the life lived - easy to take for granted, missed greatly from a distance.

I bought the paintings above and below from an old friend from childhood - one for the boy's room, one for the bathroom. She seems to live a somewhat enviable bohemian life in Texas, the life of a working artist. This is just a guess, based on what scant interactions I've had with her on Facebook. I wanted to fill the apartment with some nice artwork. I also have a picture of mine waiting at the frame store. The same one that was sold here on this site to a regular reader.

In the boy's enthusiasm to use newly discovered "potty words" I have been helping him along a bit. He has an abiding fascination with both form of genitals, butts, pee, and of course poop. I asked him what poop is called when it's found on the backside of his underwear. He seemed puzzled but was happy to report, that's just poop!

So I gave him a new phrase that he took great excitement in: diaper daffodils.

We laughed and laughed, and why not. Neither of us entirely understood what was meant by it, nor did we need to. It made sense because it was funny, and who can't use a sensible bit of nonsense here and there. 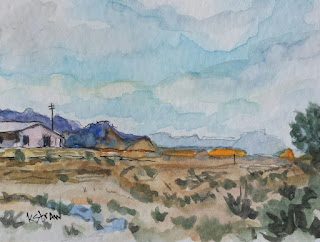