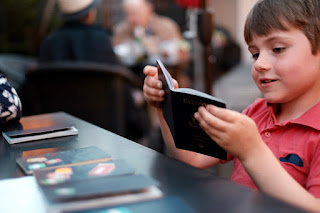 I'm becoming quite prolific in the unpublished posts category. I wrote what I believed to be a wickedly funny essay about fucking trannies this morning, but my finer sensibilities prevented me from publishing it. There are many that are essentially incapable of laughing at such a thing, and denounce all those who can. I am of the other sort.

Not just fucking them, but all sorts of stuff. Maybe I'll post it another time. It disagrees with the rest of this morning. I'll let it linger there; Lugosi amidst the rafters.

The boy and I took mom out to dinner last night for her birthday. It was a tremendous success, everybody involved agreed. Rare moments are precious, so I'll not be precious about it here.

Not today, anyway. We were all smiles, laughter.

The boy had just received his passport. Mom and I brought ours out, to let him build an idea of us, the countries that we had traversed. Of course a narrative unfolded around the shared stamps, visas, and dates of ours. It wasn't planned, though there was a palpable cloud of wonder that grew inside the boy as we each told the story, acts separated by oceans, other acts not.

This morning, I took the boy to a pornographically proportioned breakfast and let him eat piles of chocolate pancakes. I ate some prime rib scramble that was described as being a special. I began a kind of penance shortly after ordering, well before it arrived, then long after it was no more.

When we returned, I shaved my head and used a towel as a cape, ran around the house as Underwear Man!, singing an impromptu theme song which touted my virtues, the last in a series of which was my mysterious ability to disappear, enacted by my flight out of the doorway to another elsewhere. The boy could hardly contain himself, and I. Now, he has a fresh identity from which to draw, places to use that new passport, people to be.

He wants to go to the North Pole, first, to thank old man Santa face-to-face for his cryptic generosity, and I have expressed interest in going with him.