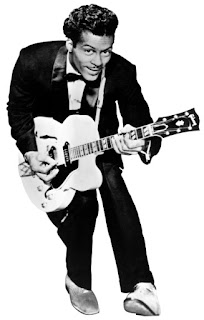 Sunday is here, if you had not already heard. I wasted a part of it by writing a series of personal errors in the form of paragraphs. I'm finally embracing the method of writing out my grievances but then never publishing them, never sending. It's therapeutic, I'm told. It's almost like writing anonymously, but I won't burden anyone with the task of reading, trotting through my litany of internalized complaints. Instead of writing anonymously here I'll just accrue a few non-existent readers.

Chuck Berry invented the language of rock guitar. At the very least he created its early syntax. Like so many other kids, Johnny B. Goode was one of the first that I ever learned to mangle on the strings. Never quite playing the intro correctly, then spiraling downhill from there across the track's verses, never quite recovering from the poorly played opening notes.

Strummin' with the rhythm that the drivers made....