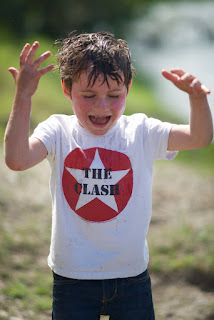 I've figured out my problem. Or, one of them. I start writing before I post a picture. This reaction to the horror of an empty page, to emptiness itself, produces all manner of morning monster. The blank page invites opinion for some reason, which is where things begin to go terribly wrong for me, because nobody asked.... Then, there is the realization of said opinion, which confirms the suspicions.

Best to post a picture first, it has a guiding effect on the page.

I fear that my son is adopting terrorist sensibilities. In the picture above he had just detonated his first homemade roadside incendiary device. It was a great non-military success. I'm considering putting him in one of Mike Pence's prayer rehabilitation camps. My concern is that the only way to bring a five year old back into the fold is to have them ask an invisible entity the penetrating questions concerning their nationalist affiliations, sexuality, and of course gender identity. Surround them with white, presumably heterosexual, Christian men, then let God's divine anointing take place in his heart. It's important that the men surround him, and touch him with their eyes closed and prayerful hands.

It's what the Huckabees pray for: 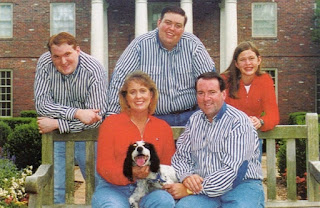 I'm reasonably certain the girl has begun her transitioning in this picture. The long hair is only temporary, part of Arkansas law that her family wishes to uphold. She's awaiting her SRS induction. It's why there are four pillared phallus in the background, not three. That's known as symbolism, because the three dressed in buttoned-down prison stripes have rendered their gender irrelevant long ago. The upright symbols being all that remains of their once erect manhood, last dimly felt as part of the tickle of early onset puberty. Their penises were removed over time by a 4000 calorie daily diet, resulting in the soft accretion of flesh that sometimes resembles a woman's breasts.

Why is their bench placed so unevenly in the walkway? Vertical stripes make some people appear thinner than they actually are, though it is helpful if your physique does not upend the illusion by force. This photographer perhaps had a cruel streak, or more likely this represents a victory for the tripod industry, and the announcement of stylishly patterned Spanx outerwear. All of my form-fitting habiliments have reinforced denim patches on the knees and elbows.

Quite inexplicably, there appears to be a normal, middle-aged woman posed with a dog in this picture, a happy canine that is being playfully choked. Its current captor might be a hired mom-model, hard to say with any certainty. There are numerous agencies for that sort of thing peppered across the great Ark state, all of which are currently seeking to expand their client base.

If not, and she is an actual member of this amorphously shaped clan, then every now and then she must look around the estate and whisper quietly to herself, Jesus, I would love to get laid just once more. What the fuck happened? Her masturbatory fantasies stretch all the way back to early middle school, to the very last time she felt as a fully developed woman might, when she was being fingered at the local premiere of Lawrence of Arabia.

Do you remember when transgender people were quietly encouraged to wait until early adulthood to make their decision to transition? That must have been almost a decade ago now. Those were primitive times, before Facebook took over as our ethical lodestar. We have supportive families now, ones that are willing to encourage their children to be the gender they feel, and I am grateful for them. When I was a kid I was screamed at for wearing my mother's underwear on my face. I guessed they were angry because I didn't have a sister.

Facebook is the only support I get in these matters. They understand me and are willing to denounce all those that don't.

Some people falsely mistake my conversational tone about such things as mocking derision. It's not, at all. I support everybody's rights to make their own choices, truly. Also, I love wearing women's underwear far too much to take the subject lightly or to denounce others who feel similarly. Why does women's underwear feel so good when you put them on, as they move across the hair on your legs and even north of there? Well, don't answer that. I know why. It's because they're irrationally soft and delicate.

Okay, see? This is why I shouldn't be posting my first draft. If I stopped here then I could dash out a couple quick sentences about the joys of fatherhood and the lonely passing of time. Instead, I have people thinking that I'm an intolerant panty-sniffer, when that's not the case. I'm tolerant, some have suggested far too much so. It's almost as if I invite controversy to prove my tolerance. If only there were a social media platform for others out there like me.