You'll see, anything can happen 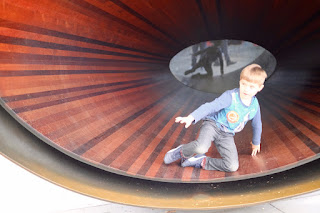 Directly out of a weekend with the boy into a week at work, one in which I am on-call for certain types of emergencies. I went home from a Super Bowl party early last night. The boy and I had been out and about since Saturday morning. I falsely believed there was no way that Atlanta was going to blow a lead like that. As long as you don't have an aversion to the type athlete that cheats here and there then that Tom Brady is really something. Now, if you believe cheating discredits a person, well then, just ignore the record books. Cheating makes people smart, and being smart is the only way that a person can become wealthy.

He is still sleeping now, a solid hour after his normal wakeup time. I guess the weekend was tiring for him also. Having fun sure does take it out of you. It steals energy from the future, fun does. I know. I'm reasonably sure that I am just now working my way through a few weekends from the late 90s.

Ugh, nope. I tried to write a blog post and gave up.

Let me see... I'll try to be like Aaliyah, just dust it off and try again.

It's the littlest things that matter. I just wish there weren't so many of them to always attend to.

I just cleaned a sliding glass door, restoring it to its intended purpose: to let the available light pass through. Some time back, when he was much younger, I let the boy put stickers on the door. I surmised that it served a two-fold purpose - to give him something to do in that moment and that it might one day prevent either of us from walking or running into the door when it was closed. The stickers also prevented me from cleaning the door, which for a time I counted as an additional benefit and purpose.

Time passed, smudges started to accumulate. As is true with so many things, it being dirty became familiar, to the point that I became blinded to just how dirty it had become. Let's say that the window needed to be cleaned two years ago or more, about the time I moved in here.

Anybody familiar with kids, either through having their own or looking on with disgust at the predicament of all parents, will understand that things just build up and there's very little that can be done about it. Children revel in the chaos of filth. Order and cleanliness, to them, must be a concept as diabolical as the Grinch. Or worse, it must equal the evils of parenthood.

Cleaning behind them is either a constant task or an impossible one, and you only get so much say as to which of those two choices it ever will be. For whatever reason, this morning became "my morning" to turn one tide back to the ocean from which its waves came.... I asked the boy to peel off the stickers there on the glass door, assuming that it might require some scraping or even some nail polish remover. I came back from the kitchen with the Windex and paper towels and all of the stickers had been removed. Just like that, it was easy. Now, what sunlight there is above fills my bedroom, as little miracles sent from our local star. I keep walking into my room to marvel at the simplicity of it.

I offer this semi-anecdote only as expository for a later post. You'll see.