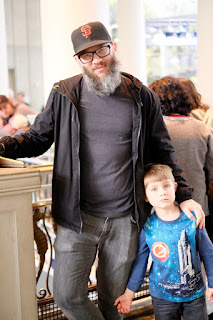 The so-called president is killing me. I can't escape it. No matter where I look and no matter where I go, the talk is all the same. America had grown tired of politicians and the mainstream media. They wanted a real Washington outsider to run the show, so they got their il-dream-duce. Nobody's tired any more.

I don't know why everyone is so upset about it all. What are the chances Trump will live as long as Mugabe? Term limits should prevent him from anything over eight years, if they can hold. How much damage can any one man do in that time? It's those two evil sons of his that I worry about most. Men that ugly, when born rich, have uncertain longevities. There's just no current science to help us understand what to expect from those two. They get daily infusions of tortoise blood, so they could live well into the 2220 elections.

The online memes are pollution. All of the false equivalencies and bad logic don't seem to raise anybody's sense of ironic detachment. Steve Jobs' father being a "Syrian refugee" is meant to inform our current view on things, apparently by blurring the lines between what it means to emigrate and what it is to be a refugee. The now popular meme also leaves out that his adoptive parents were not college educated. I guess we are left to presume that skipping a college education must then also be likewise advantageous, and help in the process of creating billionaire children.

And just think, Apple was that close to having been a Syrian company: 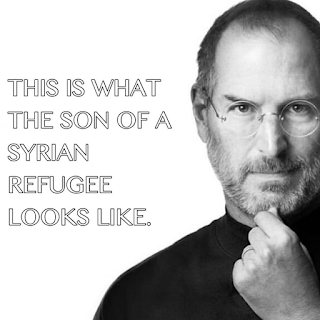 (Also, a renowned son of a bitch)

The diminishing importance of college education is yet another popular though unrelated opinion advanced online by people too dense to understand what makes nations become something that might be considered great. I have a once college-educated friend who recently pointed out, in a meme of course, that about 80% of the jobs available do not require a college degree. I'll let you do the math and necessary consideration on what that is meant to mean.

Speaking of greatness. Everybody agrees, our institutions are outsized, we should all return to the glorious time of the writing of our constitution - horse and carriage, or just carriage if there are no horses left. I've been re-reading Cormac McCarthy's The Road for a few laughs and to help keep my sprits light. I read it to the boy at night, to help us fall asleep. It gives us a visual image of what adventures might still be awaiting us. I still believe McCarthy should have titled this allegorical work, The Old Man and the Parable.

Well, in others news... my buddy and I took the boy to the California Academy of Sciences yesterday. He loves looking at all the snakes and butterflies and birds and bugs and fishes. We ate sushi and pizza at the cafe, then returned to my buddy's house to watch Minions and Hotel Transylvania. Too much enrichment can ruin a day. Later, we went to eat at "Cheap Chinese." That's the actual name of the place, it was not a slur, and it was both inexpensive and unsurprisingly did specialize in Chinese food.

At dinner, I tried to explain to my friends of Jewish and Filipino descent why it is so vital that we keep American culture free from foreign influence. Plates of food arrived, so I missed a few key talking points and I then couldn't really rally the troops after that. I was going to try to get them to set a Kiehls store on fire with me, but they explained that Kiehls is an American company, much to my surprise and incendiary disappointment. Back to the drawing board of the purity in racial complexion, I guess.

What would American nationalism even look like? Does it mean that I won't be able to eat Thai curry? No more burritos, or guacamole? Oh goodness, I hope not. Can you rally a nation into eating only cheeseburgers and drenched fries? It seems that even the most staunch of the American Insisters might break from ranks every now and then for some Fettuccine Alfredo at The Macaroni Grille, when nobody's looking.

I like pretending that sensitivity to other cultures is like going to a mall food court. You don't have to eat at Panda Express or Chipotle Grille, but neither do the presence of those places require that you firebomb the place and then burn Nordstrom to the ground. Even if you see a white kid serving food at Panda Express and you just can't stand it, just let it go.


Why do I get the feeling that Ikea will be safe in this New America? What would a rise in American nationalism look like? It could start with an insistence on drinking Sprite over Mountain Dew, because it's purer my führer. Arguments will arise, spectrophotometric considerations will be advanced, all concerning the turbidity of Pepsi as compared to Coca-Cola. It seems that American nationalism might require me to gain some weight, just to fit back in. American nationalism might be the first movement of its kind to slow itself to a halt with diabetes.

How will the resistance ever devise a test to see if they've been infiltrated? They'll order egg rolls and fried rice for dinner but then those fat fuckers will just eat it all, even though they're not supposed to. The paradox of American Nationalism. Whoever eats all the egg rolls will either need to be silenced in the basement or maybe they're just a famished freedom fighter.

Okay, what the fuck. I'm never going to recover from this Trump New World. I thought that it might be funny for a while, but no, the best among us have already lost their sense of humor. Instead of laughing at people like Milo Yiannopoulos we have online feminists debating the moral considerations and complexities of whether or not it's okay to punch Nazis. They repeatedly go out of their way to insist they are otherwise pacifists, but what do you guys think about punching Nazis? The paradox of American Online Heroism: I've never punched anybody, because violence never solves anything, but I would so love to Snapchat a Nazi punch.

Maybe that should be the name of the new online resistance: Otherwise Occupied.