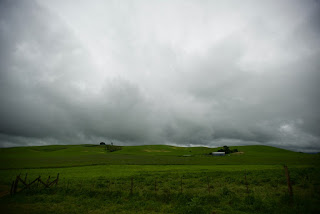 Yesterday, I had an evening meeting, so I took off on my bike in the late afternoon, thinking that I would get a ride in while there was still sunshine to enjoy. I determined that a ride up into the mountain loop was the best, as it is a ride that I know well and takes me just about an hour. The remaining rain clouds appeared to be clearing up and there was nothing but sunshine as I worked my way up about 700 feet in elevation to the loop road at the top on the eastern side of the valley. As soon as I hit the upper valley loop and made a single turn I realized that the entire sky was divided in halves - sunshine and supergiggles on one half of the sphere, something wicked this way comes occupying the other, a legion of demons trapped in a turbulence of blackness. I told myself that it was being pushed out into the Pacific and that I would be fine.

I fought my way through the headwinds that were pushing inland, not at all out to sea as I had thought and hoped. Just as I hit the steep downward grade that would let me coast for a few minutes the hail storm started. Because I had taken my mountain bike I had not worn a helmet. This was as much a tactical error as it was a potential safety infraction. I longed for the little plastic visor that would have helped shield my eyes. The bits of hail made hundreds of direct hits to my uncovered and mainly hairless head. My rather large nose was pelted mercilessly, as were my beautiful hazel eyes, so much so that I had to stop and shamefully curl up on the side of the road in a crouched fetal position, whimpering to the earth, cursing the fates, trying to prevent any further damage. It had become impossible to ride in and far too dangerous to attempt that downward grade with only one hand steering, the other blocking ice from getting the final kill shot that it was looking for.

After a handful of tortured minutes the rains took over where the hail left off. The temperature dropped a couple degrees which coincided perfectly with my soaked shirt, shorts, and shoes. There was nowhere to go. I considered riding up a driveway and trying to find an overhang on somebody's house to wait it out but this is farm country and you do risk being shot for such a thing, Nobody questions the good sense of shooting trespassers here.

Bullets are cheap, better use lots of 'em is the unofficial county motto.

Once the hail had done its damage then there was only the return ride home in the waning rains, the drops of water irritating the skin where the hailstones had made the most direct impact. There were hundreds of little welts all over my head and face by the time I got home. My bike would need chain oil soon. Then, of course, my meeting was cancelled. 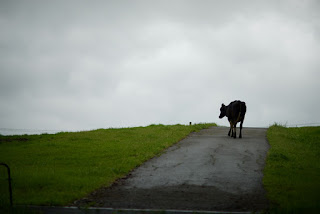