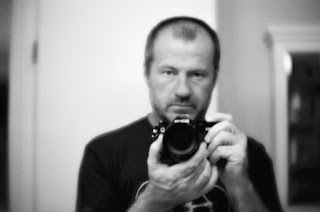 A woman I work with invited me for coffee yesterday. She then asked me a series of What's going on... type questions. I tried to explain. Something about the strain of maintaining ambivalent feelings, offering that maybe things just change, hinting that I had just become older by having a child. She was having none of it. She instructed me to write each day without publishing here, to give myself the space to write truthfully, and then to hold myself accountable to those truths. She gave me instruction on how to be as honest as I can about what I want, then to look back on what I have written as time passes, to verify that I am actually moving towards what I want and away from what I no longer want.

Well, the way I have described the conversation it makes it seem as if it was staunchly goal oriented. It wasn't. Though, the conversation did perhaps arrive at an appropriately good time for me. I had been thinking along the same lines, more about setting goals and verifying that I'm keeping them. The decision to sign up for the triathlon was in part a reaction to the feeling that it was best for me to put something out ahead of me, into the future, something to work towards. You know, the old work ethic combined with crippling sense of cultural and quasi-religious guilt.

Sort of. I just wanted something extra-curricular to get me through the winter. I suffer from seasonal depression, or at least that is what I call it when it rains. In truth, I wanted anything that would produce the feeling of having a stated goal. I have plenty of interests, but they are all badly organized, if that word can be used to describe them at all. They occur slowly and over time, which makes them seem as if there was some type of order involved when it was only the organizing principle of time involved in their development.

Don't worry, we also talked about the importance of transitioning from coffee to tea in the mornings. So, it wasn't all navel-gazing self-examination on my part. Yet, after the conversation was over it occurred to me that we had spent the entire chat discussing my predicament. I do not remember asking her how she was, and drove home wondering, telling myself that is not the way to be, to not ask such an obvious response question. It is one of the curses of being self-involved. I only remember to ask somebody else how they're doing when it occurs to me that asking might make me seem empathetic. No, that is a partial truth buffered by a bad joke. I do care, but in comparison everybody else seems relatively healthy when held up against me, so why dig?

I can be effortlessly useless when I let my mind drift. It's so easy to just talk about myself. Like this: I cut my coffee intake almost in half this morning.

So there is that, there is something.