The Bravest Of All Possible Worlds (The Nuclear Family) 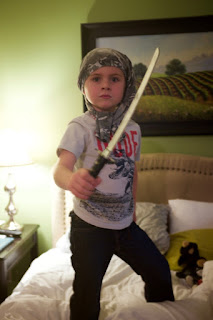 It's the rain. It's been raining for weeks and the forecast shows it as being non-stop at least until the weekend, where I might find my Eureka, Jesus! moment once more. I went for a ride yesterday, my first since my self-inflicted accident the Sunday before last. There was a break in the rain, though not in the clouds. It was enough to let me get out and ride for an hour. It's nice to feel that my mountain bike still has some use. I took it up Thornsberry Road, which runs behind my favorite vineyard, Gundlach Bundschu. I rode happily without a helmet along the edge of many houses and farms, and rolling-hilled wineries. There is a freedom from self to be had in exertion.

I read online that people who post the details of their workouts have something wrong with them. The article didn't say what was wrong, exactly, though it danced around the subject of narcissism. I thought, Well, that sounds like me... I should start posting more of my exercise routines. I want that to be something wrong with me, too.

It's nearly all that I do online now - ape the outrage, humorlessness, and lack of ironic detachment of others, though sometimes I do get too close to the fires of single-thought outrage and get sucked in. After 9/11, conservatives loved claiming that "Irony is finally over..." Nope. When the history of irony is written in its ever opposing codes the ascendence of Trump will mark the much better breaking point for its recurring permanent failure and temporary death.

One way to combat irony is to deny it power by refuting the meaning and purpose of your own actions. It's the mechanism of irony without the humor.

This is one of the reasons that nobody can touch Trump. He is paradoxical for the purpose of duplicity, rendering him less affected by sarcasm, which orbits the heart of irony. With a sweep of his Tweet he rubs away his detractors, simply because he and his cabinet have started repeating na-na-na-na-na-na-na to everything that is being said, to every question that is being asked. Irony can hardly sustain itself in open dialogue that can not agree upon its own intended meanings. Denial of fact provides less bearing from which to be ironical, or to fix the target upon which it can then function.

Even the criticisms of SNL, couched only in slight exaggeration, seemed for a time to be effective, to somehow get through, though less and less so as the weeks pass. Once Trump starts to ignore the imitations of him as a failed leader then those remaining on the left will find themselves looking at one another and wondering what happened, entertaining themselves again.

The next thing to come will be retaliation against criticism. A national emergency will be invoked to justify the opening up of the libel laws. When bluff is used as a rhetorical technique it leaves less of a center of meaning from which to negate, deny, or attack. This allows motive to be obscured, often just enough. The emerging assertion that his inner cabinet does not understand what he is doing is manufactured. It is the same tactic that was used to great success in the campaign. Everybody just acts as if they're doing everything that they can to get a grip on what crazy old president Trump is up to now. All the while it's pretty easy to see what he's doing. He is dismantling the liberal advances of the last eight years and testing the limits of his power so that he'll know best where he needs to expand them next. His failure at grabbing power will seem to be only a liberal restriction, one in desperate need of immediate correction.

There is no innocent buffoonery happening here. His cabinet will use their own previous accusations of Obama's executive overreach to normalize their own continued overreaches. The question of his legitimacy as a president will soon enough fade into the background. He will need to become something more than a president, a sort of ultra-president. The current title will prove to be insufficient to his purpose and he will move away from its use. A self-defintion of his purpose will emerge, becoming a necessary part of this transition. Or, the title will be kept only as something to consider with open disdain. He is already flaunting its position within the structure that sustains it.

That's what I do to get to sleep. I sit and dream up the avenues by which the next and possibly last major power grab will go down. America used to depend on emergencies to keep itself at crisis. Trump has advanced a position on immigration that is in advance of any and all emergency, which is an important shift from the past. It's as if that Obama was just sitting back and waiting for things to go wrong. Trump advances the Why wait? pogrom.

Liberals have tried to argue for the humanity of allowing continued immigration as it has been. Bad move. They should have agreed all along that we need to protect America first with strict immigration procedures. That we already have these in place seems to be the big mystery here that too few seem willing to state out loud. The right has been very strategic in their use of ignorance. They just keep asking, Well, what are those procedures? Are they good enough for me? As if nobody knows. You can't counter xenophobia with an appeal to decency. You have to first acknowledge the fear, then try to agree on its source.

If you can't demonstrate a fear to be irrational then you can hardly convince anyone to not experience it. Any parent can tell you this. We tried to talk to conservatives as if they were adults with legitimate adult fears. Bad move. We should have just asked them all along: Which Muslims? Where? The naughty ones that sit in the back of the class?

Oh, I see. All of them? Everywhere?

That should be a reasonable starting and ending point to that dialogue.

I started playing out post-apocalyspe scenarios to get to sleep last night. Then again when I woke up this morning. It's what I do now. Can you see how this, combined with the Bladerunner rains, has kept me worked up a bit?

In the early days of the end of times I thought that families would bind together into sensible "survival units," where being single again appeared to be a disadvantage. The families would seek to keep out lone individuals as being far too risky to the collective needs of their family survival structures. Then, I thought that with limited cell networks still available then survival apps would start to emerge, where singles would be more able to mobilize quickly and effectively, organizing themselves into loose adaptable patterns, eventually enslaving the families who would naturally fight to stay together, falsely believing this to be to their own collective advantage. This important twist on slavery - keeping the family units enslaved together - will prove to be very important as to how the more mobile actors in the post-apocalyptic world will be able to use the strength of the nuclear family against itself.

Well, I entertained that along with some other milder post-apocalypse diegeses.

In some Revelations-fueled synopses the more right-wing gun enthusiasts would be used to form protective shields among larger social groups, organized strictly along the lines of protectors and protected. Watchmen Of The Apocalypse, or some other title of imaginary honor would be given to them. They would all be part of a seven-headed dragon, or something. Still believing some vague patriotic nonsense, they would be willing to die to protect groups that they were told would one day naturally reform to Complete America Again. There would be two types of soldier: the stars, and then of course the stripes.

It would take an entire generation of them dying off before this call to the glory of the past would also fade along with that generation. The tribalism of their fathers eventually being replaced by a less nationalistic version of same. Local tribes would kill one another off until it made more sense to enter into treaties amongst themselves. This is where I would rise to power, as a negotiator for the rebellion.

I wonder if anybody is still reading any of this without memory of my mentioning irony. I'm not a gamer, so I am less practiced with these fantasies. Maybe that's what I'm missing in all of this. Had I developed an abiding love for single-shooter scenarios then perhaps I would have a better grasp on what possibilities exist in a newly collapsed world, where rightful power is restored to the individuals with the guns, the brightest muzzle flash, and the most quickly replenishing ammo.

I dunno, with a little luck maybe one day soon we could all join the Militia McCarthy.