"... some strangeness of proportion" 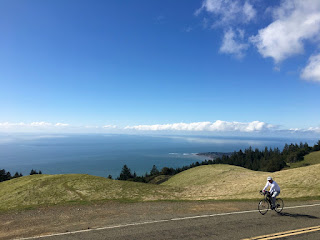 My buddy tried to kill me on Sunday. He's much younger than me, probably 30 or 40 years younger, or much more, who knows. Being from Denver, he's used to leisurely weekend rides up and over terrifying mountain ranges, rides that were formed by hundreds of thousands of years erosion and violent plate tectonics, designed specifically by Mother Nature to kill Floridians.

I had never cycled up 4000 feet in elevation before. But, I did it. As long as I hold on to my memory I'll be able to say that, I did it. It's 800 feet shy of the elevation differential in the Half Dome hike. A bike does make life seem much easier, though, doing with a person's energy what they could not do otherwise, a collective device made from the genius of mankind.

The day was delightful, more than the eye can take in to keep or hold, then all that comes along with those feelings, as if my mind was breathing after having taken a break.

I've always wanted to live in a place that's hard to believe. Growing up in Florida, everything felt too believable. The beaches are very nice there, though they can be mundane in the way that all beauty requires some strangeness of proportion. The complaint that can be lodged is that there are perhaps too many of them. They have you nearly surrounded.

Too many beautiful beaches - that made me giggle.

Consistency of proportion tires the eye and mind. Florida beaches strike that near perfect balance of sky, water, and sand to satisfy the basic requirements, but that's all they ever do, just stretch on and on and away from you in both directions. The Keys are where Florida becomes dynamic.

Back to the Sunday ride, also on a peninsula - the Pacific side of Marin, from Mill Valley across to Stinson Beach, to the northern point of the Bolinas lagoon, then back up towards Mt. Tamalpais, over the Seven Sisters, along what would be considered the ridge that separates the coastline from the rolling hills that occupy the land east of there.

My buddy joked that one of the roads will look familiar because every car commercial showing a sport's car driving through the woods was shot on it, and he was quite right, a redwood forest high up along the ridge line, the seemingly endless ocean on one side, the sunlight from above on the other. The road was closed to traffic; ideal for our purposes. I've always wanted to pass through places that are impossible to believe, where dreams and other dreams become interchangeable without putting up too much of a struggle.