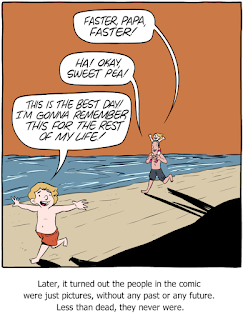 Women, are they ever going to shut up?

Not if McConnell has any Neverthelesses left in him.

Nope, no politics. I had more fun writing about the boy yesterday than I've had in many mornings here. Politics are a two-sided poison. Though as CS has pointed out, there is no escape. America sure loves its democracy and capitalisms. If you listen to some they would have you believe that those are one in the same.

I almost want to see the Libertarians win soon, and big, just so we can put that version of the American myth to rest for good. Jesus, they are an annoying bunch - smug in their ideals, bereft of all evidence. We could have had Gary Johnson. Right now we could all be laughing at President Johnson, but his tongue got in the way.

Ok, must stop, otherwise the doomsday device loses all of its charm and power.


I didn't actually teach my son any pre-dirty words. I did give him the phrase "Butt Lightyear" to champion among his friends. He's a big fan of the Toy Story series, so it made perfect sense. Irreverence must be cultivated, else how is it to grow? Irreverence requires the nurturing push of a cynical mind.


I have been listening to a lot of 80s music. I'd like to say non-nostalgically, but it does slip in there. Oh, but what fun - The Cure, Talk Talk, R.E.M., The Replacements, U2, Talking Heads, Bowie, New Order, The Sisters of Mercy, The Cult, Wire, Love & Rockets, etc., etc. I've given each of these bands a recent listen, and to at least a couple of each of their albums.

My advice: don't go back and listen to The Cure's Pornography. It is a lugubrious event. I mean, that must have been their intention, but fuck... Smith rendered himself unlistenable on that one. It sucks because with Seventeen Seconds and Faith it seemed as if the band was going exactly where I would have wanted them to, but no... No, they did not.

That one album aside, it has been a lot of fun. R.E.M. was not quite as great as I gave them credit for at the time, though still very good. U2 should have been lost in a plane crash just after finishing Achtung Baby. Not killed, just lost somewhere, maybe on an island where they could try converting the natives to the doctrine of self-righteousness. Talking Heads are the greatest band of their time. Nobody else even comes close, though New Order's charms outweigh their occasional mediocrity, No matter how many times I listen to them I can't quite determine how they pull off this very magic task, but they do.

The Replacements make me want to drink, at least up until All Shook Down, which makes me never want to drink again. They were a band that could have used the help of Alcoholics Unanimous.


Ok, it's the weekend outside. If I don't motivate then my list of things I want to get done will begin to taunt and haunt me, like that dismal Cure album. It is pornographic, if you confuse frustration for satisfaction, or the by-product of a thing as the thing itself.