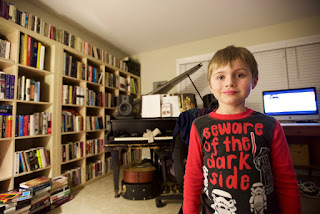 (Beware of the Dark Side, Son)

I don't have post-apocalyptic visions running through my head. It's only a quip, an equivocation, all of the day and all of the night, mostly in the mornings. I'm channeling what I see online, on social media - the runaway fears, the irrational reactions, our doomsday president, the Republican Brotherhood trying to implement Old Testament Law in America... It's a fun time to distort the zeitgeist by amplifying it, as if it is my own. As if.

I do enjoy working my way through scenarios in which I accrue a team of nuclear sex canaries. I'm not entirely sure what a sex canary is, or how they could be best utilized in a post last-days world, but that doesn't stop me. I can picture several of them perfectly. I would be their post-pimp.

Is it sexist to be a pimp? Are there pimps in the afterlife? Are we allowed to ask those questions? Better check with the sexes.

Writing this way helps nothing. Though it can be fun, pretending. I don't think that I am ever going to see a woman naked again without the event being preceded by the exchange of capital, probably followed by it as well. I imagine that sex acts that are entered into with an eye on getting a bargain become renegotiated mid-coitus. That's how I would do it anyway, knowing what I know. A sort of bait-and-bait tactic.

That women accept money for sex is not my fault. I need everyone to understand that fact before we move on here. I'm the victim in a series of victimless crimes.

There was a time when I believed that things matter. I am distancing myself from that position after a more thorough review of the evidence. I'm not flip-flopping. I have the needs of my constituents to consider. Pretending is great, though it offers no return.

Having a kid is difficult. There are a new set of expectations that require you to pretend more, though differently. Then, there is group of experiences that you might deny. There are independent events that emerge as being the only reality there is, and one enforced. Lastly, there is a subset of emotions that it becomes best to just forget, or at the very least to put away. Not forgotten perhaps, but boxed off with the other remnants of the past.

It is dangerous to keep your past out. Some would end that sentence one word sooner. Memory seems to exceed its evolutionary usefulness for reasons that continue to entertain me. I am exercising the imaginative component as a method embraced, to keep from arriving each morning crazed and desperate, half awake, swinging wildly at the stars. Life is fragile, if you carry it delicately then you're more likely to drop it. Try to be natural, run for the shadow. Etc., etc.

The problem with people is that they need temples. Then there is the other problem, once they build them.

I worried that one day my cynicism would become a burden. Those days are dead. Now, I pretend to worry that cynicism has been replaced by despondency and horror.

Cynicism will have me back. It's a bad relationship that has a few grim laughs still left kicking around inside of it. Old, half-forgotten jests that have a little life in them, when retold unexpectedly and at all the wrong times.