I borrowed a book from the ex last night, At Twelve by Sally Mann. The images still possess the power to startle, perhaps they always will. That being the very point of the book, it seems. One of the great taboos, the sexuality of girls as they straddle innocence and what comes next. 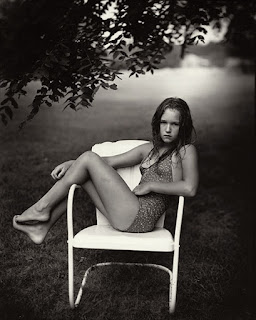 What knowing watchfulness in the eyes of a twelve year old... at once guarded, yet guileless. She is the very picture of a contradiction: on the one hand diffident and ambivalent, on the other forthright and impatient; half pertness and half pout. She disarms me with her sure sense of her own attractiveness and, with it, her direct, even provocative approach to the camera. Impossibly, she is both artless and sophisticated; a child and yet a woman. - Sally Mann

The book is something to look at. Impulses start to appear from who knows where, telling the eye to look away, that you are looking at something that is not meant to be examined in that way, like the pubic mound of a child for example. Then some other part of the self starts to argue with the eye, wishing to believe and advance its own agenda. Some little imaginary war goes on between the sense of aesthetics and the memory of virtues, between act and accusation, between viewer and subject. Or rather, viewer and the viewing.

It is an interesting experience. You are not meant to deny the sexuality of the subject, that is its very point. How did something so seemingly simple take on these attributes, one wonders. The answer to the question arrives immediately, yet there is something else. It is, or seems, taboo beyond just the societal forces that make it so. I am left to question whether or not some taboos are the result of those social forces, or if they are more innate. The fascination is innate, we know that, though perhaps the caution is also. We are told that men are more susceptible to image than are women, which begs yet another set of questions.

Sally Mann doesn't bother helping you resolve those questions, she restates them. 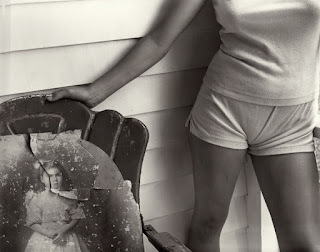 Does it mean anything at all to accept or deny the sexuality of young girls. The asking of the question creates a phantom answer, That's not for you to ask! On any other subject my response would be a swift, Why not? What is the hesitation that happens before that response appears in my mind as it would otherwise. The response seems less sure of itself, immediately surrounded.

Like a stain on the mind of mankind, it seems impossible to remove sexuality from the observer, because, well just look at the images!

Talking about the sexuality of young girls is similar to talking about the experience of alcohol. To comment at all is to form a space around the subject, with the speaker trapped inside. You must feel either this way or that if you are discussing it at all. To have formed opinions seems indicative of something. How else would an opinion magically appear where it is not needed and was not invited? The assumptions abort conversation before it can begin. In this way honesty is denied, then denounced as untruthful obfuscation. For a young girl's sexuality to exist at all it does not require an observer, though some aspects of it are dependent upon that observation.

Everyone can see it. It requires no special vantage point. Yet it remains one of the grand invisibles, the silent situation, the unspoken act of public puberty. Fascination with the human experience alone seems an insufficient reason to gaze at images of pubescent girls. Though what impulse could be more plain? It is why we look at all things. These general reasons do not satisfy the mind of some, though, and likely never will.

Sexuality occurs in that magic bubble where the mind and body of one meets that of another. Nobody can stop what occurs there, so it is guarded fiercely from the exterior. Parents can occasionally reach in and pull some uninvited intruder out, though not very well and often with partial success. Some attraction is strongest at its point of denial.

Recently I heard the old apologetic phrase derided once again: Boys will be boys...  The purpose of the stating of the phrase was so that we would understand that we are not to simply accept this as an excuse. If one approaches the images of Sally Mann with a similar assessment, that girls will be girls, then something very strange happens. There is a difference that arrives immediately to mind, one that seems to make clear how we allow men and women to use their sexuality in different ways. Not even allow, but insist. Social forces that might otherwise expect equal treatment between sexes continue to suggest that there is something inherently good about women, something which achieves its zenith at the time of blossoming, and that there is something inherently wicked about men, something that begins it dangerous descent at a similar developmental stage.

Embedded deep within the traditions of inequality rests the odd disparity of sexuality, the dual claims of difference. Mysteriously through all of this people still emerge with some semblance of self-possession and dignity, a balancing act between the sexes that relies as heavily on its counter-weight as it does upon itself.