The re-molding of a snob 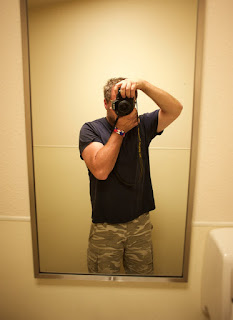 ("Self's self" by Sean Cusick)

I arrived in NYC in the early morning, emerging from a powerful chemically induced sleep, then jellied myself into a taxi when the subway would have been a much better choice. $50 only to go a few blocks in bumper to bumper traffic. The White Castle has not changed much since I left. It is depressing in a way that only it quite knows how to be.

I went back to sleep as soon as I arrived at my safe house in Bushwick, stayed there as long as I could with the purring help of a sleep cat.

My friend with whom I am visiting suggested a coffee shop a few blocks away and then a donut shop directly across the street from the other. I stopped by both. I could not decide on a donut so I bought two, telling myself that I'd take a bite of each and only eat the one I liked more. That is not how things worked out, though.

I chose one donut on my own and took the recommendation of the counter help on the other; french bread with chocolate and nuts on top  being my choice and a peanut butter with jelly filled center being theirs. 3500 calories later I was shaking from the landslide of sugars rushing my bloodstream. I nearly ate the bag that they came in, in the hopes of finding some sugar residue.

It's nice to be back in the most important time zone again. The sounds of this city are like no other. It's as if the trucks are made from a different type of metal, an alloy peculiar to the five boroughs. The brake pads are tuned to this locale and must be changed if the vehicle is ever expected to be used elsewhere. The painted traffic lines are not rules but rather vague recommendations, nothing more. Here, people are gruff with the simplest of ambitions - getting into a line of traffic from a side street, making it down the stairs to catch the subway that is just arriving at the station, ordering a slice of pizza before they've reached the counter.

Elsewhere, for some unknown reason, people just seem nasty, pushy, entitled. Here it is a currency exchanged in advance of all else.

Anyone that wishes to ever live in a city should be forced to first study how to do so in New York for a few seasons. All residents in other cities somehow get it slightly wrong, though they each might possess some quaint charm in their regional error. New York attitude is not what outsiders perceive it as, at all. It is a simple litmus test that each conducts on each. If you can get past the accusation that is a deli worker wanting to know what type sandwich you'd like then the climate of the conversation immediately changes. However, if you stumble with that initial confrontation then you have not yet learned how to live, and should probably do so in another city, one that has lower standards and can be found west of here.

New York is a literate city, also. Everywhere you go you see people reading books. California never quite embraced the concept and people will think nothing at all of interrupting you while you are quietly reading, neither recognizing nor understanding the sanctity that is being asserted by both the posture and process.

It is the many little things, and a few of the big ones. There are no larger assholes than in NYC. That is important to remember, as well. You can not count on everyone to always get it right.

Tomorrow we will go to the Metropolitan Museum of Art. If you think your city is something special to tout about then you have never looked up and around in that building, or you have not understood what it is that you are seeing.

I have watched that building swallow tourists by the tens of thousands, expelling them out into Central Park afterwards as flightless prattling pigeons, still clucking and cooing and looking for food.