Very little time to write today. I stayed up much later than normal last night watching Being John Malkovich with a friend. I gravitate towards films that deal with the subject of persona, and the sources from where it is derived. It had been a while since I had seen the film and I excitedly picked up on, and then insisted on commenting upon, several new lines. I'm certain I was being tedious.

It's part of my persona.

New York City awaits. We will go to breakfast at The Coffee Shop in Union Square, then we're off to the museums uptown and perhaps a walk through Central Park. There is a cafe on the backside of The Met where the western wall that faces the park is angled glass from floor to ceiling, letting in generous portions of the day, usually for good rather than for overcast ill.

It allows a view of the park where an ancient Egyptian obelisk, colloquially known as Cleopatra's Needle, stands. If my memory holds it is three thousand years old or more. A stone phallus from the past to help you enjoy your tuna salad.

We will take some lunch there, sipping white wine and suffering my opinions on art.

I wish to stay in bed longer, to enjoy the best part of having a day off: lying still and relishing the feeling that nothing at all that must be done. Hearing only the voice inside one's own mind that tussle with the unfamiliar sense of freedom to do only as one wishes. 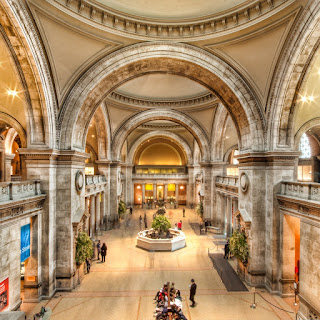