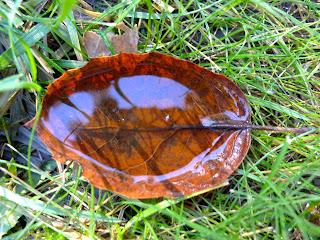 (My first attempt at reading leaves)

What I meant yesterday was that, in literature, details are often arranged so as to be convincing, to express specific or general truths. As events unfold in the narrative they can become increasingly persuasive, the more connected they are to initial details relayed. Seemingly insignificant events early on in the telling can serve to affect a character's final undoing, or victory. But the author, if careful, has placed these details into the narrative for a reason. It gives the impression, when done well, that all things work towards a central theme or purpose.

Somewhat likewise, in astrology, human truths and characteristics are spread out as to be general, and slightly opposing, giving the adherent the impression that otherwise unrelated events - the position of a few planets in the solar system against the mighty backdrop of the cosmos - has a direct effect in the believer's life. If one celestial assertion does not quite jibe with their current thoughts about themselves, do not worry, there is always more to read. You will find something to attach to, if you pick and choose at will, as you are encouraged to do. If the astrologers have their way, they will bolster this selection into something to believe in, the final sense of completion being a shared activity. This is all done quite intentionally and is designed to produce a mystical sense within the subject - that they are directly connected to the cosmos and are involved in its perpetually majestic unfolding, like the notes from a giant galactic wallet.

The thing that I was trying to point out was that in literature this effect is created so as to be convincing. Also, in astrology it is part of the scheme to be there, to convince. But one is designed to relay truths while the other is designed to deceive. Just as we can look back into our lives and find what seemed to be insignificant details among thousands at the time, attaching them to the current state of our lives in what seems to be an unbroken lineage, the astrologer can appear to make connections between the rising and falling of planets and our subsequent moods, advising on a preferred course for our lives.

It is a device used, either literary or mystical, but always for the purpose of persuasion. When I discussed a person's inability to distinguish between the linear and the exponent I very much meant what I said, though it was not directed at any specific person. All that it should take to forever dismiss astrology as an interest or belief system is a careful examination of the techniques used to achieve its persuasive effect. Because the "truths" advanced there would prove to be far too general and victim to subjective interpretation to be of much use for any individual that possessed even a modicum of genuine self-knowledge.

The sole purpose of astrology is to make the subject feel special. Persuasion is the primary device used. It is rather easy to persuade someone that they are special when they have arrived with the specific intent of achieving that feeling.

The opposite might be true for literature, for some. While some read strictly for the pleasure of plot they might not wish to understand the devices used. While others, who might wish to read both for pleasure and understanding - carefully studying the tactics employed, measuring their effectiveness against others - accomplish a wholly different thing. A contrast might lie in the acceptance of ambiguity. In one it is there solely with the purpose to deceive and obscure. I'll let you decide which is which.

This is not to say that literary pleasure and understanding are exclusive, mutually or otherwise. It is suggesting the opposite, that they can become indistinguishable. In astrology the goal is to dispense pleasure to the subject with only a burlesque of understanding. This is one reason why those who accept money for their spiritual powers will never discuss with their clientele the actual methods they employ. They will discuss astrology as a gateway to the universe but they will avoid the detailed methods they use to create return customers, the art of persuasive commerce. Their success in this regard is tied directly to the methods they employ, not the position of Venus. Though the position of Uranus is always a consideration, etc.

Writers are a mixture, some will discuss their methods, while others do not. This often depends on book sales. With substantial book sales they have little financial need to speak publicly, with fewer sales it becomes increasingly important to avoid working for a living. They must perpetuate their vital art somehow.

One wonders at the day jobs held by struggling mystics, how best to unleash the psychic fury that awaits.

Yesterday's post was not written "at" anybody. It was an observation about people and what they choose to believe - more specifically, what they actually do believe based on what they are capable of understanding. Neither was it a slur on those who are not mathematically inclined. This might help, for those interested.

Refuting astrology is easy. Refuting the findings of any astrologer for any of my friends, not quite as simple.... Because the kernel of truth given is the subject's life itself, handed back to them in a way that pleases.

Apparently, all that it takes to renounce all of science is one lone zodiacal possibility, mixed with a generous sense of wonder and fascination, a drop or two of faith, and a few large bills.

In this world, there's one born every minute.

Those born today are known as Capricorns. As a group they are indistinguishable from every other zodiacal sign. But don't try telling them....