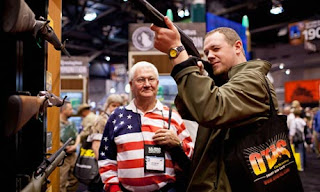 The gun debate continues, unabated. I am, as you can probably imagine, unable to sleep. The excitement is overwhelming.

The thing that really struck me as odd yesterday is how easy it is to get an argument really boiling over just by agreeing with anybody. They will find a reason to criticize you for not agreeing with them enough. Truly, it's insane. A friend from Texas posted yesterday about how excited he is to be going to a gun show: "One of the SAFEST places in America is a gun show."

I suppose he's right, unless you happen to be an 8 year old child, under adult supervision, firing an Uzi... I mean, you have to really love guns to watch your child kill himself with one while just trying to make you happy. I'm certain that the boy was told to NEVER let a gun out of his hands while discharging it. Safety First!

Natural selection next, what else can we tell ourselves.

As I mentioned at the end of my post yesterday, I had listened to the beginning of a pro-gun talk-show on the way into work. I have tired of listening exclusively to music on the drive in and am seeking talk-shows to pass the time. This show, like several others that I've heard, had its fair share of kill fantasies. It's amazing how often the gun crowd will lapse into these fantasy scenarios, describing how they would have stalked their prey as soon as they smelled danger, which gun they would have chosen for the kill shot, how they would have trained their red guide laser on their target, the head, maybe the mouth, the lips, then Bam! PENETRATION.... and on and on.

After having sex they just think, "Target neutralized."

It is twisted, yet none of them ever seem to see it for what it is. They all quiet down when one of them lapses into a kill vision, showing an odd reverence for the teller's mastery of the situation, for the completeness of their dream. It always ends up with the bad guy getting theirs. Sure, you might have lost a few good men along the way, but that's simply the price of vigilance. They get shy when somebody mentions heroism. It's always vigilance.


Yesterday's fantasy discourse started with a comment that suggested that it would be a challenge for a mass-murderer to be quite as effective at a gun-show. The presumption being that they would be shot, or that they would never have the nerve to attempt it in such a place initially. *

It developed from there to this:

"Those proficient with a firearm would be easily able to recognize an offensive posture as well as certain kinds of body language that would bring them into a defensive posture themselves.. Defense is always sensing offense in particular when you have vigilant carriers.. " - Herb Berkley.

He seemed to detect nothing wrong at all with this statement. You see, gun owners have a preternatural sense for detecting the crazies... They can practically smell a killer's gender from 30 paces, or whether or not they're in heat, armed, or merely just foraging for children to rape...

The pro-gun people refuse to concede anything. They don't operate independent of fact as much as they operate with an entirely independent set of facts, all self-generated. They see no relationship whatsoever between the proliferation of guns in America and gun crime rates. They are willing to discuss anything as a possible factor to illegal gun use in America except easy access to them. Their solution for the gun problem is simple, guns.

The stats are staggering. There is almost one gun for every citizen in America. 88% was the number I saw yesterday, 9 guns for every 10 people. But just try to get the pro-gun audience to discuss access as a possible problem. All they can say, or so it seems, is..."Well, you think the criminals are just going to turn over their weapons?" As if the problem isn't too many guns, but too few, just in the "wrong hands."

So, that's what many of them are calling for in the wake of this shooting: More Guns. They want armed volunteers in schools. They discuss how, If there had been even one legally documented gun owner in that school, then those kids would have at least had a chance. Ignoring that the chances of survival for those children, and all future children, would also be greatly increased by fewer guns. They're only willing to discuss their chances of having gotten a clean shot on that crazy kid, who knows... maybe before he had killed so many of those innocent children. I'm not saying I would have stopped it, but if even one less child had been harmed. (Pause to fight back the tears. Now there, there...)

None of them are even willing to discuss the idea that if there were far fewer guns in America then that kid might not have had access to the ones that he did, or the thought of mass killing might have never even occurred to him. It's an argument that is too late to make, that we should reduce the number of guns in America. The guns are here, their owners seem strange, filled with human hunting fantasies.

It's an argument that is too late to make.

I'm going to again propose Hobo Hunting. I mean, let's face it... It's the hobos that are most likely to get hold of a gun and shoot some damned place up, am I right? If we were willing to let them loose in the wild, and have well-trained, licensed hunters pay for the opportunity to track and bag them... Well, it's just common sense how good that would be for the country.

The most startling thing about the ubiquity of kill fantasies among them is that none of them ever seem to caution one another from engaging in that sort of behavior. They will all trot out their detailed fantasies of what they would have done. Every fantasy involves them killing another human. Not one that I've heard involves preventing spree-killings through a shift in national attitude on gun proliferation. Or, at least not by discussing reducing the overall number of guns in the country, somehow.

I know, I know... I keep going back to a point that I've already agreed is a lost one.

I'm just like a gun owner, talking about what I would have done...

(Note: No hobos were harmed in the writing of this post.)

* - The original quotation has been removed from this paragraph by request of the author. We are currently in discussion as to whether or not a comment made on Facebook constitutes intellectual property. Anybody with substantive information on this topic, please contact me.