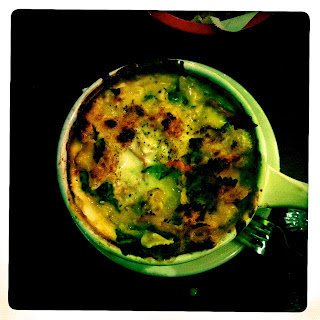 (The Pasta of Ricky Bobby)

I left work yesterday at 3pm, hoping to beat the commuter traffic across the bridge,  then hoping for a fast dash home. Right away I noticed that something was wrong. Leaving the parking lot behind the office there was traffic backed up in both directions. As if life were a only video game I maneuvered my way down to Lombard Street, hoping again that things would be better once I had made it across the bridge.

Nope. I sat in gridlock for about half an hour. It took me ten minutes to move one block.

Finally, I called Cato and asked what he was doing. Nothing, he said. I cut off on a cross street, re-crossed Lombard with some struggle and headed up his way, along the Presidio, towards the park. We sat at his house and chatted, drinking Mexican beers, listening to music played on shuffle, playing the guitar. Trying to play the guitar. My hand has not recovered and I still have no strength or dexterity in two very important fingers of the left hand. In truth I am not a great guitar player anyway. But now I am reduced to something that can not fairly be used to satisfy the term, guitar player.

The beer seemed to help, though I know that it is never true, particularly with actions requiring delicacy. I was only aping the act more forcefully. He put his guitars away and we chatted.

"Let's walk down to the Haight. We'll bar hop until 6 when this new place opens up that I want to try. Are you hungry at all?"

We did exactly as he said. We stopped into a cool little beer bar called Magnolia, then went to another that was practically a sports bar right down the street from the restaurant that was going to open at 6. I had to piss and it was 5:50.  It all made perfect sense.

By the time we were done drinking our beers and independently pissing we walked back to the restaurant and it was almost full. 6:10. There had only been 4 people waiting out front when we were there before. We were lucky to be seated quickly. The restaurant was not yet serving beer and wine due to a lack of license, we were told. I walked across the street to buy our last beers of the night. My last beer of the night. I still wanted to drive home and the beers were piling up on me. Some food would help, though they will always tell you otherwise in driver education classes. Like with most information the state gives you, they are lying.

The place was named "Ricky Bobby's," presumably after the Will Ferrell film with the subtitle reflecting the namesake. My guess is that it was meant to be making fun of the very food that they were happy to serve and sell, southern-ish and "decadent." (An obligatory word that all readers of food articles must have tired of, but one that was irresistible for the purpose of this post.)

It worked. There were quirky photographs blown up to extreme sizes hung on the wall and two-headed animals mounted over the chalkboard menu. All seating was on shared benches. It is the type place that I have missed since moving from the East Village, a restaurant that can only exist within city that believes itself cool, where it can attract its vaguely reluctant clientele. It was idiosyncratic, with not only a willingness to be eccentric towards concepts of decor, but as a requirement.

We decided that we would share food, in the urbane manner. A Beef and Bacon Burger seemed sensible, of course. The dinner-sized portion of baked Mac-N-Cheese with pulled lobster, corn and spinach... some Sweet Potato Tots, and of course the two tall Sapporo beers that I had secured from the deli that sat diagonally across the intersection.

We chatted about the foolishness of smoking crack cocaine. I imparted my extensive wisdom on the matter. We joked with the couple sitting next to us, pretending to be sharing their food with them as it arrived, relieving her temporarily of his tediousness. We patiently waited for our food to arrive.

Midway through our beers our sweet potato tater-tots showed up, fresh from the deep fryer. I cautioned against eating them while they were so hot, still wise against crack and its many ravages. But Cato ran his heedless ways... We both dove in. The trick was to completely submerge them in the cream sauce or ketchup before eating them. It helped with the cooling process. A few minutes later we were shamelessly devouring the bowl of them, alternating sauces only as a mild tempering device. Having only been given toothpicks to serve as cutlery we were as the two miniature musketeers, vanquishing for all time this humble southern bowl of fried sweet potatoes.

The main courses arrived. Oh my... did I ever feel foolish for slaying so many tater-tots now. There sat a baked bowl in front of me that had a layer of crusted cheese on top and nature's goodness poking out here and there at ever inviting angles. It was like an orgy of melted cheese and lobster and pasta. I would get to the hamburger soon enough. We both dove in. For a few minutes there was only the sound of two men eating. Forks hitting bowls and the front-facing stages of the very beginning of the digestion process. Slowly, we recovered and remembered that we intended to share. Reluctantly I moved the bowl over to his side of the table. He cut the burger in half and placed a double-layered creation on the plate in front of me. The onset of early digestion resumed.

Once we started speaking again we each refused to stop stating how good the food was, punctuating our "Amens" and "Hallelujahs" with the crunch of ever more tater tots, to help wash down the burger and lobster-cheese-pasta. Uncharacteristically, I left my beer unfinished on the table. I waited for Cato outside to start the long walk back to his place, already regretting having to shed off any of those delicious calories.

We talked about old times, working together in NYC, some mutual friends there. I divulged a story that perhaps I shouldn't have. The lobster mac and cheese still had possession of my faculties, its fiery pincers from the deep still working their aquatic mysteries on me. I explained that it was a "different me" that had done those terrible things. Though I relayed the story heroically, with some laughs - not too many - out of a sense of propriety.

Once done, I gathered my stuff from Cato's and said my goodbye, hoping that the bridge would be open and the roads thereafter exclusively mine, having earned them well in advance.

I crossed the bridge into Marin, settling into the sleepy darkness ahead, as the lipids and I became one for the long ride home.