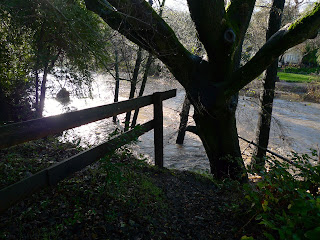 (...the river has doubled again since last I looked)

(Addendum: Since yesterday's post I have been given legal advice from amateurs and experts, almost all of it disagrees with all else said. Among the lawyers there seems to be a consensus that, if a judge would even hear the case, they might be able to make me take the quote down. Though they would have to give reason for this. They all agreed that trying to sue for damages is a case that probably would not even be heard. Again, this is all just fantasy play-acting. My friend asked me to take it down and I did. I do not believe there is any real threat of litigation, though I haven't heard from him, so... who knows? None of the lawyers who gave me advice were quite sure if something published/said in an online conversation involving several people would be protected under any established copyright law. It is a statement that was made with the original intention of being shared. They all agreed it would depend on how much money someone was willing to spend in pursuing the case. If I receive a "cease and desist" letter we'll all have a better idea of what my immediate future holds. All of you will be among the first to know.)

I can't tell if this blog is making me have deja vu or if I've already told some of these stories before. I sat awake in bed this morning reading through the last few weeks, trying to see what others see. Now, of course the stories are going to sound familiar to me. I've experienced them, and then again relayed them. But there was yet another layer, a sense that I had told the stories before, here on this site. Not that it matters much. I try to embellish enough in storytelling that it is never quite the same from telling to telling, I hope. But it is the feeling of it that strikes me.

As my old film history professor used to say, "Feeling is a way of knowing." It is a sentiment that I have often repeated, though mostly never given credit for it up until now. I hope that he does not sue me. He has discovered this site and has been reading his way backwards through the times of my life, seemingly. I need to write him an email but I spend most of the time that I have, if not all, in any given day, to write here on this site.

Don't worry, Charly, I will get around to it.

I have to work today and tomorrow. It's how they punish atheists now. I get to work from home. But while everybody else is downing egg nog or wine and whiskey, gnawing on meat bones, washing it down with chunks of cheese, I will be keeping a small part of the internet safe from falling apart.  Holidays are a very popular time for attacks. We must remain vigilant. Apparently the people who seek to do unidentified harm to others are just like close family and friends, just waiting for the holidays to pick a fight.