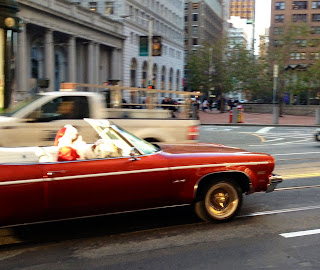 I've been lying in bed with strange visions gnawing at me. My mind is, like this nation, divided on many issues. I want sleep, I know that I need sleep, but I will lie in bed reading articles about a family that was raped and murdered. I do this just to consider singular arguments for gun ownership. Not that I was ever against gun ownership, but somebody sent a link, wanting to make sure I didn't run out and buy an AR-15. Their enthusiasm leans heavily towards the Glock 19 with a laser sight.

Then, once I've sufficiently frightened and disgusted myself with tales of home invasion, I'll lie there and try to go back to sleep. Not easy. I can't even jack-off to push myself towards dreaming because - after reading about a wife and children being raped, strangled, and then set on fire - I end up just feeling bad. I don't even need the eyes of God watching me to know that it's just not going to work. I pretty much confess everything here anyway. Who needs God when you've got almost two-hundred daily readers?

After the election social media was sort of boring. Not just sort of boring, it was very boring. Everybody pretended to be relived that there was much less political talk on the airwaves, but I could sense their secret desire to keep the argument going. So, I did what I could... My small contribution to the unsettling of the nation. Then the school massacre ignited an ongoing debate over gun control. Everybody jumped right back in, all of the wordy opinionaters. Much like with the general election, I had mixed feelings, and neither side seems to have a complete answer, or even an adequate answer. The country is deeply divided again over gun issues, and almost along the same political dividing lines. It's the same people trotting out the same stale line.

Here's an example (from me, last night), in response to a post somebody made, laughing at the idea that criminals were just going to hand their guns over to the police:

"This reasoning almost suggests that we should abolish all laws that impede criminals in any way. Those laws are a burden on society, because they do not actually stop criminals. They are regulations which criminals will not obey. Why should we pay taxes when the bad guys are going to break the laws anyway? This sort of rationale never seems to ask the very simple question: If everybody had a gun then who would be better at using them, criminals or citizens? It's an honest question. Every law abiding pro-gun citizen I know talks about how criminals would just get "taken out" if there were just more guns in the malls and schools and churches... yet there are far more of those law abiding citizens legally owning guns than there are criminals. How do you explain the lack of vigilante law enforcement? Because, by this reasoning, there should be as many examples of legal intervention as there have been crime. But there isn't.... Not even close. Crime should be almost non-existent by this reasoning, but it's not. And the argument can not be reasonably made that there are not enough citizens armed. There are far more of those than there are criminals. The numbers simply aren't there. They don't add up and they never have. It is a fantasy that has no floor-plan, no future but annihilation and apocalypse, which is what the pro-gun crowd seem to be preparing for, even inviting. It is a social crime to argue for a thing that has no proof, and can not actually happen. More guns do not equate to more safety. The pro-gun crowd seems, to me, to think just like the criminal element. It is a matter of self-preservation alone. They do not seem interested in what will produce a better society, by any accepted democratic standards. They seek personal gain, based on preference, and power. They seek to maximize their gain while minimizing their risk, like most. But does arming all of society actually minimize the risk in the way that they believe it does? It just doesn't seem possible, and no figures seem to support the idea. It becomes a crime to insist that greater access to power solves the problem. Power is not just what you can destroy, it is also what you can preserve."

Now, I haven't kept completely abreast of the gun argument, but I'm not sure that anybody's suggesting that people hand their guns over to the police. If this is an actual aspect of the debate, then it is news to me. I thought that the argument was just to re-institute the ban on the manufacture and sale of assault weapons. But they (the pro-gunners) reason that if you let the government take away any of your guns then you can rest assured that eventually they will come after all of them. A serious consideration and one that shouldn't be ignored.

One of the reasons (that's right, there were several) that the founding fathers included the 2nd amendment to the Bill of Rights was to help ensure against a tyrannical government. An armed populace is a strong deterrent from runaway abuse of power.  Or, so the argument goes anyway. I fail to see how it has stopped tyranny on any level, but that is the argument, and oft repeated. Some insist that their shotgun is the only thing between this beautiful nation as it is and complete and total chaos. And when I say insist upon it, I truly mean insist upon it. These people are deeply involved in the advancement of cocoa-puffs. I believe that some people actually do perceive themselves to be part of a midnight militia. I'm almost afraid to ask, because knowing would likely seal my fate.

When most people say the word "Minutemen" I assume that they're talking about the 80's hardcore punk band. But no, these people are referencing the American colonial partisan militia. They see themselves as inheritors of that lineage. Guardians of the gate, if you will. I guess that they've forgotten how poorly those bands of guerrilla fighters actually did, how useless they were to actually defend a nation most of the time, and that most of them didn't even own or have guns, much less know how to use them. The existence of marksmen amongst them was a rarity.

There is a growing hum in the air of American social discourse that suggests an overarching conspiratorial shift. More and more I seem to be hearing the sound of sabers rattling in the garages and basements. The darkness is approaching, from all sides. There is an adamant insistence on the idea that anybody not armed to the teeth deserves whatever raping awaits them, whether at the hands of their own government or by whatever home invaders luck upon them. If not those, then there are always the Mexicans to worry about. So the story goes.

One "friend" blocked me from Facebook a few weeks ago. Shortly after Obama achieved his re-election effort, the guy posted, "One man with courage defeats a majority." Or, something along those lines. I should mention that this guy is very, very pro-gun, probably sponsored and fueled exclusively by cocoa-puffs, etc. Not just your standard pro-gunner either. He insists in each communique that everyone recognize his staunchly pro-gun stance. It almost feels as if there is a gun pointing at you as he posts. Perhaps there is. It would not surprise me at all if he has grown deeply suspicious of the computer which enables his rantings. He's the type person to tape over the camera because he doesn't need the government watching him, etc.

Well, I taunted him and he took the bait. It escalated rather quickly, though without the discharge of a firearm as far as I know... Now I'm just waiting for the pipe bomb to arrive in the mail. I mean, who really needs rapists any more?

(I wrote this post before I came in to work today. On the drive in I listened to a gun advocacy program that was recommended by a friend. There were several points made that I wish I could incorporate into this post, but they will have to wait. I am tiring of the gun talk anyway, as I'm sure many of you are, especially considering that I am not just outright denouncing the existence of them. But the main point that I took from this talk show, a thing I will have to research, is the claim that gun control laws have never been shown to reduce crime. If I get the time I will investigate this and get back to you.  I haven't really argued for gun control laws, but I hear many that are. If the claim is true then I will be curious to see people's response to it. More later....)