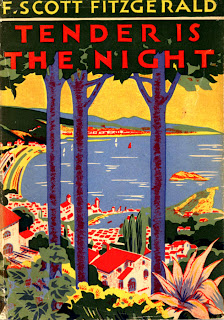 A day spent by myself was part of what I needed. It has become apparent now, afterwards. I was feeling very restless, unhappy, trapped in recurring anxieties. My days are filled up with too much otherness, the otherness of others. For those who gain the details of my life through his site alone you might develop a somewhat inaccurate portrait of such a thing. Though in fairness I wouldn't know. Perhaps it is the ideal perspective.

To say that I have occasional suicidal thoughts would be accurate. I regularly grapple with demise, thoughts of it. Though I always win, it is unsettling. Life is very difficult and there is one solution for all of life's difficulties. Though it comes with several final, harrowing caveats, and there's the rub. But that is how I have been feeling for a few days, wrestling with the principalities of darkness.

I have been lying around all day today reading Fitzgerald's "Tender is the Night." I began reading it many years ago but never finished. Now, I am reading each chapter twice in succession. I am trying to become something that I never was in youth: careful. Though I am far from perfecting the trait. Next comes patience, then that should line me up for death just about in perfect time.

The book is great, much better than I remember it being, though that might be explained by the carelessness with which I was reading it. It seems probable.

A re-reading was in order.