Well, I do declare 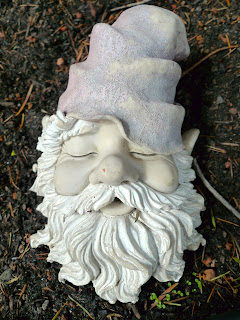 (the garden gnome of christmas past)

Putting up the bookshelves has had a strange, though predictable, effect on me. I have been haunted by the bindings of the past. The shelves were cursed from the beginning, with psychedelics and vomit. I am now remembering books that I have lost along the way, with no memory tracing back to the loss. Just disconnected flashes with little hint at what became of my life. I blame the years and years, decades, of heavy drug and alcohol use. But who wouldn't, really? I mean, if you had a ready-made excuse for all the loss in your life, why not use it. But still, there are many books that are just gone without explanation. Books that I would not have given or borrowed away. Not so much that I care about them with any particular passion, but that few of my friends would ever read such books. Few of them go beyond the 1950's in their literary curiosity. The past requires energy to penetrate. Just look at what the feminists have done with it.

And that's just the effect that the books that are not here are having on me. The ones that are here are having a much more pronounced effect. Orchestrated maledictions. Man, did I think I was cool when I was a kid. It shows in my collection. Mostly bought from local independent bookstores in Orlando. Many stolen from the bigger chain stores. A friend recently suggested how unreadable most of the books from the beat-era are now. He's right. I've picked them up and flipped through. Nonsense, mostly. Works that were carried by the changing times, some catapulted to the hip.

At an early age I romanticized the figure of the literary "outlaw." We all see how well that worked out. I haven't been gang-raped by bikers very often but there is a vague sense of having been somehow shattered along the way. Most of my friends can't believe that my life unfolded the way that it did. But that's because they're not the ones living it. From the outside it seems an independent marvel, pure luck, just short of miraculous. From the inside I can tell you that it is held together mostly by baby formula, dirty diapers and quotidian routine. It's why so many of my friends were against me leaving my last job without having arranged its replacement. They were partially right: I didn't know what I was doing. I only knew what I was not going to do any more.

The same friend mentioned above recently cited a journalist whose name I recognized, though nothing more. I did some research and found a famous article that he had written, "Frank Sinatra Has a Cold" I've only begun reading it but already it seems worthy of the recognition it has been given. Where are the great cultural journalists now? Rolling Stone, P.J. O'Rourke, Matt Taibbi?

I still have to finish the collection of essays by Vidal. The essays are arranged chronologically, sensibly, representing 20 years of his journalism. It starts out refreshing and bold. Towards the end he has adopted the occasionally tedious tone of a "celebrity intellectual." The writing remains very good but he has become more openly pugnacious, and somehow even more public.

I don't have much to write about today. Each thought has been a reaction to something else, nothing more. Well, this morning there will be a few more chapters of Tender. If there has ever been better writing before, I declare I simply don't know where....