It makes sense to be wrong 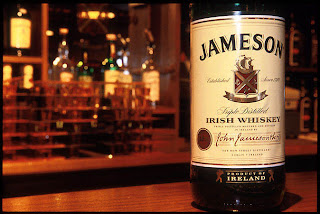 Rachel and I tried to go on a date last night. A movie. We never made it. Exhausted and sleepy before we even hit the parking lot of the theater, unable to decide on a film together. One of us wanted to see the new Quentin Tarantino film, the other a romantic comedy. You can guess. There was no argument, just a mutual concession that the film idea was out. I would have fallen asleep long before the movie started.
Instead, we went to have a cocktail together. There is an "Inn" here that fashions itself to be an upscale spa resort. Maybe it is. Who knows. I've written about it before here.
There is a bar in the lobby. The employees of this bar must be long-time friends of the establishment as they would have been fired from any other bar that had as its stated purpose the intention of making money. After much negotiation we finally got some drinks. A glass of champagne for Rachel - scratch that, a dirty martini - and a whiskey for me. They were out of Jameson so I settled on Bushmills. My Irish-Catholic friends have thankfully stopped reading this site. They would never forgive such a thing, drinking a whiskey from Northern Ireland.
There are yet others who would never forgive me drinking whiskey of any kind. I've changed.
We sat, surveyed, and mildly contributed to the disaster that is humanity. Women who were somewhat incapable of negotiating their way through the place in boots with heels, those that do not know how to dress, the aged, the weathered, the well-off, and the desperate.

There was one couple sitting at the center table of this very small lounge that looked like recovering bikers. He had on a skull cap and a steel-workers t-shirt, leather work boots. They discussed money, life, people, and their many foibles in hushed but gruff tones. I had to strain to hear. She looked like she was trying to forget the many gang-bangs she had never been officially invited to. With a fresh coat of bright red nail polish on, a suggestive color that I have not seen women wear for decades. It somehow made sense with her black leather jacket and its many tassels, her new "wave" hairstyle, new blue jeans, etc. They struck me as an odd vision.
But they were the exceptions, the anomalies.
The bar was populated mostly with guests at the hotel, sensibly. We sipped our drinks and sunk deeper into the exhaustion that we both belonged to. An older couple walked in and sat at the bar. From the style of dress and haircut on the man I assumed them to be Italian New Yorker's. A bit of Vinny Sarducci, certain to be talking loudly about his cousin, Johnny Mozarella, while looking around the bar with a toothpick in his mouth, barely sitting on the stool facing outwards with his legs spread, gesticulating with mannered certainty, ignoring his wife unless she's the only one that's willing to argue.
But when I went to pay our check at the bar I was completely mistaken. They were a gentle old European couple. As nice and cordial as they could possibly be - happy to be there, and just as happy to be chatting with me at the bar. Proud to be visiting America. Proud to be in love. I wished that I had the energy to sit and chat with them all night. They were certain to be filled with wonderful stories, and pleased to share.
Sometimes it's so refreshing to be wrong - like with my bomb-shelter, stocked with canned food, survival magazines, and my armament stockpile, in careful preparation for final and imminent destruction.
Empty bottles of Jameson littering the place, the enervating decades.
.
Posted by Sean Q6 at 7:32 AM