The "Best Cheeseburger in Sonoma" 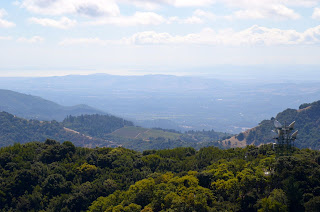 (towards SF, the bay)

Yesterday. An unexpected hike. The trail offered about an 1100 foot altitude differential. It had been a very long time.

It was up to the dividing line between the Sonoma and Napa counties, in the Mayacamas, to the summit of Bald Mountain. From that spot nearly every significant wine-country peak and valley could be viewed. On a clear day there are views all the way to the Pacific, San Francisco, and elsewhere north.

I forgot to bring my polarizing filter so the pictures I got were quite common, with lots of hazy light preventing the images from being more interesting, more detailed, with sharper contrasts. An image can not convey the view anyway. It is just something to show.

The winds at the summit were beginning to shift towards winter. From here the earth did not seem to be tilting on an axis at all. I suppose that it never does. Seem to be, that is. Only through the seasons do we sense it directly. A sense derived mostly from knowledge, memory first. There is the quarterly recognition of effect: the seasons. Then the imaginary sensation of the tilted orb moving through space and around the sun finally forms.

Perhaps it is all imaginary; the sometimes tenuous relationship between sensations, knowledge, memory, and their culmination in the emotions. We tell ourselves what we wish to believe, then we feel our way around our beliefs, wondering at their persistence. Over and over and over again.

On the drive up the valley, towards the trailhead, the beginnings of the seasonal change could be seen. Bits of yellowing trees peppered amongst the green. The occasional tree that has already shifted to red, beginning its yearly lean away from the sun.

When we reached the car my legs were a little bit stiff, having resisted the descent with fatigued legs, stiff knees. A half of a cheeseburger and a single beer later and I already was feeling better. We sat at the Jack London Bar in Glen Ellen. It was advertised as the"Best Cheeseburger in Sonoma," and it probably was.