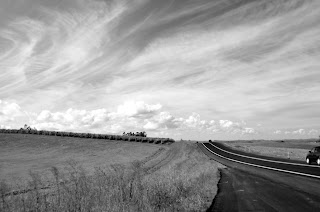 For Oktoberfest this year I think I'm going to take an oath of silence. It is the only thing that makes sense to me any more, quietness. I have grown tired of trying to talk. Silence feels right.

Don't worry, it's nothing religious. It's not even for self-improvement.

Perhaps there will be benefits to it that I can not even imagine. Who knows, maybe my senses will sharpen. Does an oath of silence also include writing?  I wonder. I don't know very much about these things. Though it does not seem that there could be very much to know. All of a sudden one just ceases using their mouth to communicate. They say that most communication is non-verbal anyway.

I will dwell in the vocally inexpressible.

I will read more, I guess. But perhaps that is counter-productive. If there is something to be gained from silence then filling my head with unspoken words might not be the way to get there. If I get to a point in which I must communicate something then I will have to write it out. I hope this doesn't confuse little Rhys. I think he's grown used to me talking to him. Well, he's young, he'll adapt, I hope. Perhaps I should permit myself to talk briefly, perfunctorily, when needed. How will I otherwise achieve basic things that are needed to be done?

Will I bring a notepad with me everywhere I go? I suppose I'll have to.

Maybe I will refrain from Facebook during this time also. Is that not just another way of talking, and a poor one at that? But then also, isn't this blog just me talking to myself? But I would be doing that likewise when silent, so why not here?

Well, I'll figure it out and see how things go.