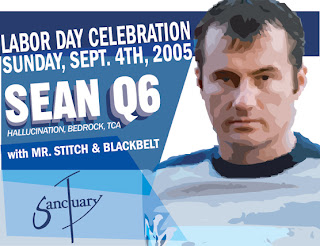 I got the job. I start work tomorrow. I found out late last night, after my flight arrived from Tampa, back in SF. Rachel and I went to a celebratory dinner. It was one of the few "dates" I've had with her in almost a year. I had a NY Strip, medium-rare. Delicious. Things are good. I slept for almost eight hours when we got home.

I was in Tampa to dj. A friend - a rather successful dj - called me to wish me a happy birthday while I was there. When he asked what I was doing in Tampa, and I told him that I was there to dj, he then asked a very simple question, one that I didn't have an immediate answer for... "What are you doing that for?"

There are the obvious answers, I suppose. But none of them felt sufficient enough to recite. I wasn't doing it for the money. I'm not trying to revive my dj'ing "career." I don't have anything particularly knew to say about the form. I haven't released any new material to support.

I mean, I was specifically there in Tampa to celebrate a friend's birthday. But I had also dj'ed in Orlando the week before, as well a as few other places here and there. I don't really know what I'm doing. Enjoying a mild case of reminiscence, I suppose. Using dj'ing as an excuse to go visit friends.  Reminding myself that I used to be cool. Dressing up for Halloween in a familiar costume.

Do you see how silly most of those sound? Only one of those reasons carries any validity, and even with that one the dj'ing is secondary to the visiting of friends. I suppose I should let it go. It will only be a matter of time before I'm dressing up in spandex and telling all of Rhys' friends how cool the band Styx used to be. Playing "air guitar" to frighten and amuse them at some poor child's birthday party.

Even the cd players that are now used only resemble turntables, USB memory sticks being much lighter than record boxes. It could be easily said that they are only the "air turntable" equivalent of posing dream rockers.

Am I crawling back towards the dim limelight, just to see how it feels... To strike a hideous pose, as something crept back from the past to scare the youngsters... to gobble all their drugs and befoul their after-parties...

You tell me. Here is some footage of the night.

Let me know what you think.