...at least as happy as others 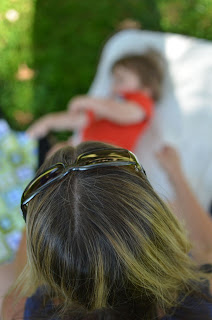 The days trudge by. I await the call that will change everything. I suppose I should continue applying for other jobs. Don't put all of your eggs in one basket, don't count your chickens before they hatch, blah, blah, blah.... Following advice has never worked out very well for me, especially advice of that sort.

I was briefly relaying the history of mine and Rachel's relationship to our dinner guests the other night: Our closest friends mostly advised us both to give it all up, to let it go. It was the story of a seemingly perpetually doomed affair. We just kept breaking up, then getting back together, only to break up again. It was hopeless.  All of my friends, and certainly all of hers, were so tired of hearing about our relationship problems that there was no reason to discuss any of it any more. Our love was damned by the fates. There was nothing that anybody could do to fix it, Rachel and I most of all. Our stars had crossed and re-crossed so many times, and so regularly, that we must have been orbiting a black hole. We were soon to be lost to the universe.

I let her know that I could not have her in my life any longer. We had ceased talking to one another. It had been about 3-4 months since the last time we spoke, which I had solemnly sworn to myself would be the last time, ever.

Then one night I asked her to marry me.

We've been at least as happy as other couples ever since. Perhaps that is what they were all afraid of.

But even so, I would never use our relationship as an example of how to love, or as a blueprint to "following your heart." It's much more of an anomaly than it is a repeatable lead of any kind.  If anything, it should function as a deterrent, when examined chronologically. The final result of a series of mistakes should never be seen as evidence in support of the many mistakes. I'm still amazed when I think back to some of the episodes we've endured, only to love one another once again. I would never have guessed that we'd be able to salvage our feelings for one another. The wreckage of our love was everywhere around us, everywhere within us, it was complete. And yet we somehow found our footing within it and moved on. The thought is both beautiful and terrifying, and probably permanent.

Things are far from perfect. As with any relationship we have our grievances, some of which are not only recurring but also advancing on us. It can be a constant struggle. The hardest part of love is often in the present and the future.

The past is almost easy; fading, softened by time, like the memory of storms.