That, and the flies. 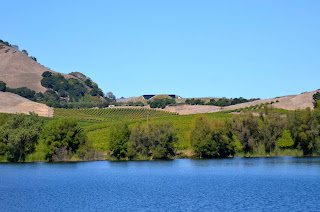 (pre-autumn hillside)
Well, everybody must go crazy at times.  That's what happened to me yesterday, and also the night before.
Sonoma is becoming an increasingly strange place to experience, to live.  As autumn continues the hills that were once golden brown have become a deeply lush green.  The trees found here and there have remained the same color but the morning and sunset light that hits the hills makes them appear to be very different than they were just two months ago.  The shapes are the same but the effect of the light has changed drastically.  I've been told that it doesn't last long and that a considerable portion of the valley floor will soon bloom yellow, overtaking the recent greens.
Many of the grape vines have likewise turned anywhere from yellow-to-red-to-already-brown, most of them having made their yearly transition.  A fair portion of the leaves are still on the vines.  Though with each passing day one gets the feeling that the next big wind storm will nearly complete the task.
The ground seems to be getting continuously prepared for planting, the industry of farming is at all times afoot.  There is an ever-present activity of cultivation in the region and currently the newly tilled soils smell of an earthy richness wherever you go. To augment the smell they lay down a seemingly endless supply of cow manure which enriches the area in undeniably seld-evident ways. To make use of the muck they water it down with similarly reclaimed sewer fluid in the hopes of it also releasing its natural goodness... acre upon acre of wet, smelly, evenly distributed cow dung....  as far as the eye can see and nose can smell.
There go I, along with regional lords, and all of their flies.
With all of this it is still an overwhelmingly attractive place to be.
There are things here that are of a uniquely collected allure.  The mind only pieces them together. They can not often be seen all at once, that's why a camera can never quite capture the full scope of it.  The mind can sense and know that there is something just out of immediate view that connects somehow to the thing seen, creating a sort of inner mosaic which completes the whole.  Pictures tend to end up just being the individual pieces without the unifying effect that the mind grants the experience.   There is much beauty in the individual parts, but a greater beauty in how the mind unifies them into an overall sense of the place.
That, of course, and the flies.
.
Posted by Sean Q6 at 8:58 AM