The Bridges of Marin County 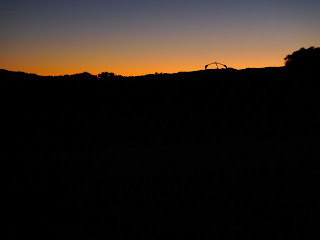 Another morning.  I started to write a response to yesterday's post but I gave up.  I only wanted to relay that I do not hate rich people, nor do I think them guilty of anything necessarily.  I was speaking only of certain rich people who ARE guilty of certain behavioral tendencies, those that I am forced to interact with.  I do not count myself among the 99% in regard to the fact that the 1% should be on guard, or watching out, or anything else.  I also don't believe in progressive taxation, which seems to be one of the Occupy movement's main selling points.  I do agree, however, that many of the tax loopholes created for the wealthy should be done away with.

Well, I won't go on any more about that.  Let's see if I can veer towards a different subject today.

Nothing seems quite as exciting as talking about wealth inequality.


Nope, I guess I don't have anything to say today.

Oh yea, there was one thing.... When I was driving home from work the other night, as I came around a bend between two hills, just before going across the Petaluma River, where Marin is separated from Sonoma County, I saw a man getting arrested. One lane of the bridge was blocked with the police car.  The brief image that I got of him was of some bewildered old descendent of hippies that had wandered too far from SF's Tenderloin region.  As I passed the car with its red lights blinking I saw him, already handcuffed, babbling something to the arresting officer. He seemed to be trotting out his story, some pre-arranged set of facts that is there to ostensibly persuade the listener to aid him on his journey.  I've heard it many times before.  It is a sort of "pursuit talk" in which the speaker is constructing a series of poor fortune events that ends in needing $6, for gas.

Either that or it is a rambling set of assertions that results in the observation that the stars are actually diamond boogers. Though somehow the teller still needs $6 for gas.

Everybody knows that the stars are merely distant crack rocks.


I must be getting old, or have lived in cities too long.  My immediate reaction to seeing this guy get arrested was , Well good, I'd rather have him taken back to his hairy hippie haven than to let him wander into the hills of Sonoma where he could potentially fester and become dangerous...

Right away I was struck with this aged reaction of mine.  Most of the time in the past I would normally have thought, That fucking cop is probably just hassling that poor guy.

I did admit to myself that the bridge did not seem to be designed for foot traffic.  I've never seen any signs that state that it is not allowed, however.  After all, shouldn't a person on foot be able to cross a bridge?  Maybe not.  I just don't know.  It was probably one of the lost children of Charles Manson, finally found after emerging from a sand hole out in the desert, gestating for decades in the womb of Death Valley.

No, that also seems unlikely.  Most of Manson's children are already accounted for, I think.

Maybe he was part of the Occupy This Bridge movement.

Perhaps the cop only wanted him to participate in the Occupy This Jail Cell protest.