I also want a hummer 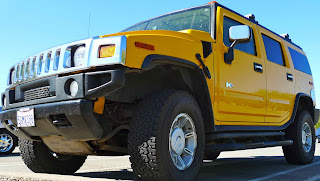 (a car named after the act of "humming")
I was in bed last night and had thought of something to write about today.  I fell asleep instead, in the morning it was gone. I intended to write about the Occupy movement again but don't have it in me to do so this morning.  I have to work again today, of course.  It is a thing that I increasingly struggle with, the work I do.
It is difficult.  I like some of the people there.  But a job, being what it is, is inevitably filled with people that seek to express, or assume, little imaginary powers over one another.  If you're not up to struggling with it, or resisting it, then it wears you down. It would be easy to say that one should just "ignore" it but they have instituted procedures that prevent such a thing.  Such is the joy of working on a happy team, etc.   Many of the people involved in management there are quite capable of performing the menial and mindless task that they are asked to, and sufficiently enough.  Beyond that they are incompetent in the things that really matter: generating feelings of communal productivity.
But nobody can blame them, really.  There is no end goal in site, and no product to take pride in that is actually produced there, beyond ever-increasing daily digits that represent wealth, always for somebody else.
I guess I do want to write about the Occupy movement today... sort of.
I have mixed feelings about the people I work with as well as the people I work for, a community just north of San Francisco, across the Golden Gate Bridge.  A large portion of the people that I interact with are genuinely nice people, appreciative of whatever I can do for them, and pleasant to interact with.  But then there are the others... they somehow seem to outweigh, and sometimes even to outnumber, the thankful ones.
They are drunk with the intoxication of cruelty, hungover from a lifetime of it. They are as aging inebriates with shrunken devoured souls, ravaged from patronizing suspicions. Their heads seem to be filled with aching morning mercilessness, squinting in the misery of daylight, producing a face that has nearly the same hallmarks as one with laugh-lines, though no one could possibly mistake that tell-tale deformation as the result of past joy.  Their only remaining sensuousness is in their perceived monetary power and the orgasmic misuse of it.  But, like any other addict they must return to their vice with the ever increasing ferocity of consumption.  They will lie and cheat, only to steal, only for the thrill of obtaining the thing they desire, which somehow always seems to elude them.  They will insist on their lies as being accepted without question, their immediate approach, always in anger, is the dead giveaway...  One day I will have the liberty to relay all of this in greater detail.
Sharing tales at lunch with one another, they are easily overheard, broadcasting their various encounters with "the help"... their shocked and gasped tones of disbelief at the behavior of their fiscal subordinates..... There at lunch they prepare one another for future encounters with brave tales of dominance and deceit, bolstering support for their continued capital callousness. In this way they educate one another on the finesse of bargaining brutality, the sophistication of asset condescension, their barely visible investments in funds and torments.
What's theirs is theirs, and soon yours will be too, god willing.
Hell is a place where one is incapable of love, or being loved. Times passes with excruciating slowness there.  I know.  It is why the state institutes mandatory timed breaks from work.
I work in the mall of eternal fire.....
One of the most misquoted phrases of all time, I should know, I take great pleasure in doing so, is: "Money is the root of all evil."  The biblical passage actually reads something much closer to: "The love of money is the root of all evil."
If money is the root of all evil then what might best describe the plant that grows from it.... poison ivy?
The other day I posted a line that stated, "Money isn't the root of all evil, poverty is."  A friend quickly corrected the line, and I was encouraged that anybody had done so.  But I was, in this instance, reacting to the seemingly universally accepted idea that money, in and of itself, is evil - not the original biblical verse.
Some people do seem to believe that money is evil, just don't ever try to rid anybody of their evils.  Money becomes even much more evil when you stop giving it to them.
Ok, the dog has peed on the rug again. That's twice in three days.  Something is disturbing the little guy and I must attend to it, impoverished little loving beast that he is....
.
Posted by Sean Q6 at 9:07 AM