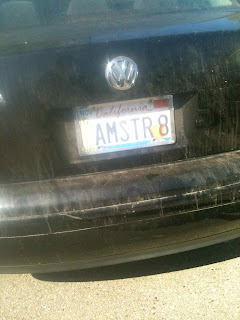 (A license of exquisite west-coast sophistication)
Ok, I was going to try to use the word "blessed" in everything that I wrote for about a year, but I've already become bored with it.  I suppose I resist being told which words I should use and which ones I should not.  It's a verygood word, and evokes many things for me, few of which have any religious meaning at all, beyond the mild sacrosanct pleasure I get from its misuse.  I will let it go, for now.  Mostly I wanted to be able to express happiness without derision from others, that's all.  I realize that happiness has less literary merit.  It is a price I'm willing to pay, when I can.
I have one day to myself: today, sort of.  The apartment where we live left a single printed sheet on our front door two days ago stating that they would be replacing the roofing today, to beware.  So the dog is pacing back and forth now, clearly terrorized by the anomalous industrial noises above.  I had planned on either going into SF to visit a thief for his birthday or driving around the Sonoma area to take more pictures.  Now it looks like neither of those two things will happen.  I suppose I could take the dog with me, though that becomes limiting.  I wouldn't be able to leave the car locked and strike out on foot, as I had hoped to.  I suppose I could leave the dog here, treading in terror from wall to wall, but that doesn't seem right either.
I could give him a Xanax but Mom would probably find out.
There is no escape.  My day to myself will be demolished, and never rebuilt, by the noisy laboring of others.  Labor... that's a word that lately keeps ending up in conversation.
Oh, blessed labor, I hardly knew you....
Speaking of work...  I was recently walking through a grocery store near where I daily waste my life, crushed under the juggernaut of capitalism, in Marin County, looking for something to eat and/or people to pepper spray.   Something there in the soda aisle occurred to me... I have tried to describe the social temperature of these people but it is difficult to do, they are not all of a single "kind."  They seem to share certain characteristics, but many people do, it is something beyond that.  There is something that feels unique, and unpleasant, singularly to the communal climate of the region.  It's like they're Yankees fans that don't know they're Yankees fans.   They are overtly smug that they have picked the most winningest team, then fail to understand how anybody could choose otherwise.
Perhaps the example of "Raiders Fans" would better suit my locale.  Either way, here is my stab at the point.....
They are like sports fans, in conflict with other sports fans, who share identical codes of "fan hood," but sadly the others do so for an opposing team.  Seemingly unable to recognize the corollary in their counterparts, they vow and renew their seasonal hatred for one another... granting themselves only the ability to recognize the arrangement of fault in others.  This fault often runs along very strict team patterns, made easily identifiable by color and icon combinations.  The currents and myriad questions of allegiance run ever deeper, ever swifter, as the years progress around them.  No amount of dedication to a regional team can suffice the angry, gluttonous gods of leisure.  No display of maniacal fanaticism towards your city's stars is ever too much, no disgrace is too disgraceful.  It is the very life purpose of some fans.
In the future we will all have 15 unedited frames of shame.
It is not necessarily a requirement that violence erupt between one team's fans and others, or even occasionally amongst those committed to the same team, but it always feels as if there is an air of mild aggression that serves to barely suppress the actual need for violence, most of the time.  The sporadic explosion of actual violence merely makes the axiom demonstrative.  It is enjoyed, then roundly renounced by all.
Ok, the dog is nervous and whining.  He's acting like a sissy at Oakland coliseum..... It's time that I take him on a photo adventure.
These were just a few pre-game bottle rockets I had committed to launch....
Posted by Sean Q6 at 10:01 AM