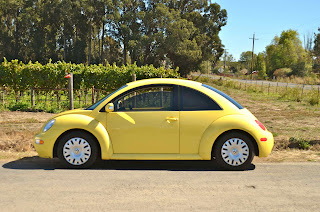 (A seemingly innocuous car, by daylight)
Last night as I was driving home, eager to arrive, my speedometer crept steadily up and up.  Stopped from breaking the law further by somebody in front of me who was idiotically going the speed limit.  I eventually found a passing zone and acted accordingly.  I dashed.  Once I was out in the open, with a collection of early Clash singles blaring out of the speakers, my speed resumed its steady climb.  85 - 90 - 95, and up. Over hill and through miniature dips in the valley, along the roadway I hugged.  It felt great.  I knew I shouldn't be doing it but the road was wide open in front of me, practically begging for it.
100. That's a good goal and I probably should have stopped there. But "Complete Control" was on and the midsection of the track was directing my foot on the gas pedal, ever downwards, ever forward.
105.  Once you've passed 100 anything beyond that is really just gravy.
The roads into Sonoma Valley were winding but slowly enough that all was good. I was being quite safe, all things considered.  I had my headlights on "bright" and my hands at "10 and 2."  What could go wrong?  If the car functions well at 55 then it should do fine at 110, which quickly came next.  In fact, it should perform twice as good at 110, I giggled.
The windows were down so the music had to be really loud for me to appreciate it, to scream along with it through the night.
I began to imagine what it looked like from a distance, from a farm on the hill. Being very accustomed to what a car moving through the valley at 55 must look like, a yellow VW Bug topping 110 with a crazed Clash fan screaming out the window must have really been something, a momentary treat, or shotgun target, or both.  At the very least, the desire to shoot or laugh at should be exactly twice what one might expect.
The world was a dark blur at 115, except what was directly in front of me and coming on supersonically.  I had no idea this car could even go that fast.  I was merely trying to burn off some of the carbon deposits that might have developed in the engine over time.
I began justifying this experiment in high speed car maintenance to myself.
But best to not let daydreams and supposition take over.  At 117 miles per hour one should really be focused on the task at hand. We'll get to engine maintenance later, I told myself.
But wow... what a great feeling.  It was like flying, only very, very close to the ground.  A really fantastic feeling... other than the thought I kept having that I have a pregnant wife at home, and I had been drinking pretty heavily at lunch, and then again on a break after lunch, but that was easily two hours ago now.  Certainly it can't take that long for the body to metabolize alcohol....  What's the ratio again?  One drink for every 100 pounds, then each additional 100 pounds cuts the needed time to drive in half, or less at higher speeds.  At 220 lbs. I could have probably even had another shot or two, perhaps a shot and half and I'd still have been just under the recommended limit.
What the hell am I thinking?  If now is a bad time to ponder engine maintenance then it most definitely is not the time to be trying to do algebra.  Like alcohol, algebra is also a word we get from the Islamic language, al-right.... let's let the guiding hand of Allah steer us home.
There was a red light somewhere in the approaching distance.  I knew that, by heart, as they say.  I begged to get lucky and have it glowing green in the night, for old go-go Gatsby, the flying Jay...  I could see it approaching across the fields and around a few long bends in the road.  If it could stay green for just a few more seconds then there would be no way for me to even stop in time for a red.  It is science.
Also, I didn't want to use up all that brake pad just for one silly stop in the night.  I could probably time a miss, not even a near miss, even if a car did decide to try and cross a clearly dangerous intersection in the night without looking first.
I thought to myself... The light that burns twice as green turns faster red.
Yes, Blade Runner.  That's it.... Nexus 117 am I, and counting....
I thought of the hot, sexy, replicant... Rachel, of course.
"May I ask you a personal question?" "Sure." "Have you ever retired a human by mistake?"
"Are you testing whether I'm a replicant or a lesbian, Mr. Deckard?"


"I'm not in the business.... I am the business."
The haunting voice of Rachel's song filtered into my inner ear. The blaring noise of The Clash seemed to fade into distant silence.  The road blurred by me in the night, unseen. The ethereal voice of the music guiding my hand, guiding the road beneath me.  I closed my eyes and trusted the resonances all around me, the whirring sounds reverberating inside me. 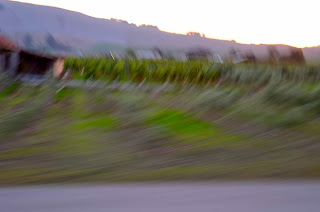