Article IV of The French Quarter 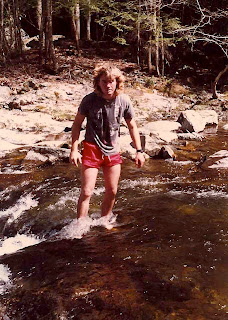 (A semi-amphibious predatory socialist)
A late-night trip to the emergency room last night.  Everything is fine, but it took the trip to verify.  A sudden unexpected scare, for sure.  So, very little sleep last night, and then work all day today....
My republican friend has kindly asked me not to refer to him as a Republican.  That's a laugh.  He argues that America is a republic, against much historical evidence for the term, yet he wants to be known by a name other than the one famously associated as the Grand Ol' Party.  Has there ever been a gayer name for a political party...? Grand 'Ol Party, that sounds like an all night hotel soiree in New Orleans on Halloween night, and the many days following.  Just out GOP'ing for the eve in The Quarter on Bourbon and St. Ann....

Very little escapes these people.  It is the nature of conservatism. They freed the slaves, you know.
It is important to remember when using the term Republican that the word is in no way synonymous with what a republic is.
A true republic answers directly to the people, and eschews hereditary leaders.  Neither of these two qualifiers exist here in any meaningful way. Our government most certainly does not directly answer to the people.  So, we are only a republic in name, just as we are a democracy only in name, having representatives vote in place for us.
As for avoiding the sin of heredity... Well, just ask around, just don't let the CIA detect you.
The term "Republic" quite quizzically appears in Article IV of the Constitution. It has fed the many dying hopes of people everywhere across this great land that one day the government will actually live up to the terms it has defined for and shrouded itself both with and in.
I would choose not to wait, but my choices might be found to be heretical and foolhardy when the hammer strikes, dear comrades, and the sickle finally sweeps.
Read the above link carefully, your loving founding padres wanted dearly to avoid actual democracy.
Suck it, voters....
Anyway, he claims to be a "conservative" and a "libertarian" rather than a Red person....  I also claim these oddly named values, though in vastly and qualitatively different way.  I would like to conserve the very liberal ideas that birthed this nation, and the noble ideas upon which it has been robbed, but I also believe in some of the very left-leaning ideologies of the Libertarian party.  Also with that Libertarian party, as with the Republicans, there is a rainbowed spectrum of options, much to the far right's assumed dismay, and matched by the left's imagined horror.
So, we're all on board here with my republican friend, one big happy riverboat of Red states, gliding down the Mississippi somewhere past midnight...

He gladly cites The Federalist Papers, and their new KJV translation, as proof.  Reading these words I am struck with the sense of dread sea, rosetta
Ok, I give up, I've run out of time and can think of nothing to finish that last sentence.  I must trudge off to the factory, as Selavy famously says.  Somebody must fight for what is still good and honorable and still left in American society.... 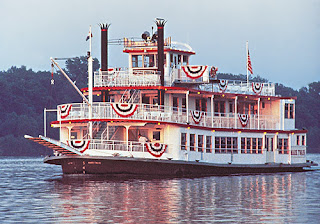 (Charon, waiting to pick up his passengers on the river Styx)
.
Posted by Sean Q6 at 9:28 AM