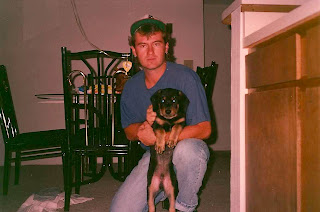 (Lyman High School, a near-alumni)
Tonight is my 25th high school reunion.  I won't be going.  It is many miles away now.  I didn't know about it until I saw something on Facebook. I scrolled through the names of people who responded positively concerning it and I only recognized a couple of names.  Perhaps I only remembered those couple of names.  I couldn't tell.  I don't remember very much on my own from that time period.  When other people tell stories sometimes I will feign remembrance, sometimes the memory will come back to me, though rarely on my own.  My youth is becoming an increasingly barren place.
I dropped out of high school the year before graduation.  I couldn't take it any more.  I didn't care for high school at all, and they pretty much felt the same about me. The administration, I mean.  Among the other students I had a few friends, few that I remain in contact with.  There are some on Facebook but with most of them I have developed new friendships there that have little to do with our relationships then, or nothing at all.  To be honest I'm not even sure how well we knew each other then. As for Facebook it grants one the luxury of knowing everybody pretty much equally, give or take a few late-night drunken posts.  I wonder why anybody would still want to be my friend if they knew me then.  I was an emotionally hostile and mentally unstable loud-mouthed little shit.  Sometimes I still am.
If I could go back and talk to my childhood self I would probably say, "Shut the fuck up you pompous little windbag" and then throttle myself into gasping tears.  No, I kid.  I have nothing to say to myself. I've broken off diplomatic ties with my past.
I knew-it-all then, and I was right.
I do wonder what it would be like to go back and see some of the people that I knew then.  I wonder how it would feel, how they would act.  I wonder how I would act, what I would say.  Even long before I moved from Florida to NYC, approximately 12 years ago, I had separated myself from the group of people that I knew in high school.  I became deeply involved in electronic music and the culture of drugs that accompanied it, around 1988.  What they say is quite true about such things.  If you see somebody distancing themselves from their friends then they might have a drug problem. They also might be having the best time of their lives, if the drug turns out to be ecstasy.  It was.
Of course 25 years later I feel a little bit differently.  There is perhaps a decade mixed in there that I might have lived differently if I had known that it would take half of a lifetime before I finally emerged on the other side of that experience.  My entire adult life so far could be reduced down to two words: drugs and music.  There are worse words to define a life by, but it makes me uneasy to have lived so simply that I can recognize an immovable truth there.
It wasn't all hard work and misery, doing drugs.  I was fortunate enough to be traveling extensively and I got to see much of the world from a relatively young age.  It was an experience that I would never trade, though I would perhaps modify a bit of it if I could go back. I sound like I'm at the reunion already... bragging perhaps... justifying, sculpting the past  along unverifiable lines.... I would modify my life story in exactly the same way that I would re-tell the story to my old high-school friends.   That is maybe why I would want to go, to hear the subtle and significant changes to the truth. To hear me tell the lies, to see what wonders arise there, what new mysteries of self I might invent.  Which doctoral theses' I might mention...

Or, I would tell them that I am now a famous gypsy, living on an average-sized, privately owned island in the southern Pacific Ocean, practicing my psychic-ness powers.

I have asked an envoy to send my "hello's" to anybody there that might remember me.  I don't hold much hope for reply.  I'll admit that I was eager to get away from most of those people at the time.  I've never known why, really.  I felt that my life was destined for something else and they were psychically holding me back somehow.  Who knows, I just made that up also.  Though now I do enjoy conversing with some of them.  It gives me occasional insight into who I was then. When they remind me of some foolish thing that I had done, or many.  Some hideous memory or collection of experience that they have been giggling about ever since.  Stories that sound plausible enough, that reflect even who I am now, so I trust their verisimilitude.
It would be fun to bring my pregnant wife to such a thing.  People really love a pregnant woman, they flock around and coo.  They would see that in truth I'm really one of them, just a late bloomer.  I got off to a somewhat hobbled start towards a family in my mid-forties.  In some people's eyes my wife's pregnancy redeems me, puts me on a better course for life, narrower and with a greater chance of success.  There is one thing that every person who has had a child tells me about the experience that scares the bejesus wits out of me.  They say, "It changes everything," often with an odd and extreme look in their eyes...
But I don't want everything to change.  I want it to be just like high school, or Facebook, or captured in the picture below, just on the verge of departing childhood.... 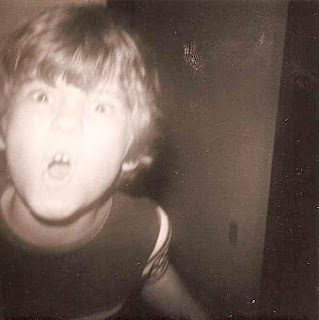 (pre-high school, a disaster eager to happen)
Posted by Sean Q6 at 9:23 AM