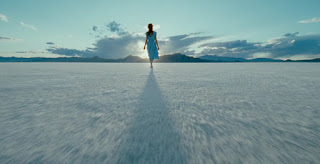 It deserves all the accolades. It is one of the more beautiful films ever made. The attempted breadth and scope are awe inspiring. Yet it is pretentious. Too Christian for my tastes, though I don't precisely hold that against it while I'm watching it. It achieves the grace that it attempts to convey. I greatly enjoy seeing it occur and there is an emotional payoff, if you can stick with it. Many payoffs, in fact. But it leaves little memory of its visual beauty in me after it's over. I don't see it in my mind when I am not looking at it, the way I do other films. That could be my fault. Perhaps I lack the depth of understanding required to commit sequences to memory. That I miss its true visual and narrative message. I'm not sure, but it's rare that something so exquisite doesn't stick with me more. When I close my eyes few distinct scenes appear there for me to re-enjoy. It is a slow film but far from boring. It somehow evades memory.

I wish that I could have seen it in the theater. It is a marvel for the eyes. You feel lucky that it is happening. Blessed, even. Perhaps being blessed is what leaves me cold and empty. Perhaps the blessing is not transportable, meant only for the moment.

Some say that the theater will be no more. If true, films like this will be attempted even less. Who would commit the time and money to make something like this for a laptop screen? Only Kubrick ever attempted to convey the history and enigma of the human experience on screen with such ambition, pretense, and a philosophically inquisitive posture.

The scenes of the father being strict with his son remind me of the imaginary childhood that I gave myself. My father did not pay as much attention to me, though, harsh or otherwise. Or, perhaps his love was also only a blessing of the moment alone.

Ah, but man's reach should exceed his grasp, or what's a heaven for. - Browning