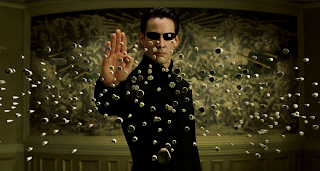 I didn't watch a movie yesterday. Mom and the boy watched Flash Gordon. Not my cup of kitsch tea. So, I drank a bottle of wine, and then another half, and argued with two old friends about social politics, about how the dems have jumped all of the sharks in the American Ocean. One of the friends has taken up the "more principled" argument of conservatism. Myself and another friend have chosen to defend liberal principles. You already know how this one ends: everybody believes they have taken the red pill and that all others have taken the blue pill.

I just discovered that The Matrix is now considered an allegory for the trans experience, among other allegorical considerations. I've never seen the film, so I have no opinion, but have become aware of its basic premise through its cultural references - that we have a choice between painful self-awareness and numbing ourselves to that awareness. But since I'm mostly regarded as a white cis male, let me offer my opinion anyway: of course it is. It's like heavy metal: about half of the people who really get into it have gender identity questions. The other half, shockingly, don't notice and become defensive when you do.

There are a spectrum of phrases that have emerged into popular culture since the trans-rights movement, but my favorite is deadnaming. I mean the phrase, not the act of referring to somebody as the name they used before they transitioned, maliciously or unintentionally. If I were ever to become trans I would keep my name or make it even more male, if only to frustrate people's expectations further. I envision a world of female Franks. That is my dream of liberty. I'd keep my cock, also. I'd just install a nice little pussy slit underneath it. Dilemma: solved. Though I suspect bike riding might become more pleasurable or painful. The pussy will decide.

The idea that we must accept anybody's identity strictly in the form they present it is absurd and insulting. Nobody actually does this. Why do so few people mention Jung in the great trans conversation? We each form an amalgam of identity clues about the people around us, and we accept as being true a portion of what a person projects, mixed generously with how we feel about the person's identity, what we have intuited about them. If we are to exclusively accept the claims of others concerning themselves as being true then I have some inventing of my own to do. I want to be more toxic, pure toxic - and masculine, much more of that. My lifelong interests in the arts, literature, and music have left me vulnerable to the hurtful opinions of others. I want to reclaim my chosen half of the binary pie. It is critical that you grant me these things that I wish for. Anything less is unjust, cruel.

Yes, I understand the differences and overlap between identity, projection, and acceptance. Read the heavy metal thing again. I am just bending the concepts to suit my own narrative. One need not transform entirely to demonstrate some mental flexibility. The claim that a certain type of self-knowledge can only be experienced by some is ridiculous. Understanding and acknowledging this does not make you an egg. I just learned that word, also.

Below is a visual demonstration of how some people see themselves, then how I see them. 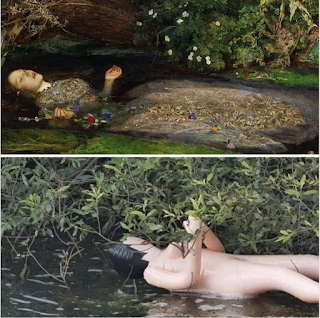