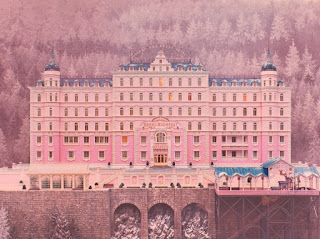 Back to watching a film for the night. I will not provide any, or very much, commentary concerning it here. The stylistic flourishes are charm-filled, the storytelling inventive. There is humor everywhere, even in the sadness, which redeems its faults. One day soon, if not already in film schools that are worth attending, Anderson will be compared and contrasted with Altman. There is plenty there to compare, for those who wish to take the time. The score for this film, I like to imagine, is one that Altman might have envied.

Okay, those are my observations for the night. I did not bother supporting any of my statements with example. This omission is intentional. It is the way that I learned to speak when living and conversing in New York. You assert a thing that presumes the listener can sort the completion of the observation out for themselves. If they attempt to disagree, they will not quite know with any precision what it is they are disagreeing with, though the temptation will always be strong, but the details distant or overwhelming. Hesitation in intellect and wit is deadly.

I miss the atmosphere of the city very much - NYC - a place where anything can be discussed. I have nostalgia for the bars and restaurants of that city as if a great war now separates me from them in time and space. The people of that world now dispersed to the scattering of which aging always results. Tonight I grant myself some nostalgia and longing for my memories, and the imagination that longing provokes.