"It's not your fault" 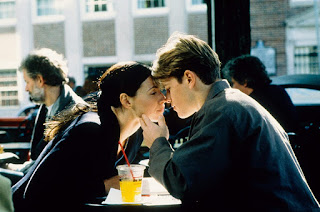 I watched Good Will Hunting for the first time tonight.

Many years ago I was being intellectually probed by somebody in front of a small audience. This person, who I esteemed, repeated the line several times to me: It's not your fault. Not knowing what they meant, but being intrigued by the power of the repetition of the line and its possible meanings I remembered the moment for years afterwards, but what I remember most about it was by how it resolved. I responded, Oh good, because I assign myself no blame. This person and I have joked about the interaction afterwards, but always through my line. It became one that we would say to one another, and likely still could, though it has been years. I never understood that what was being said to me was a line from a film. I never asked. I just assumed that I was the clever one, that I had made her laugh. Now, I believe I understand what she was saying but have no memory of the context which provoked it. I was in love with her for a while and she with me. It did not work out in the end.