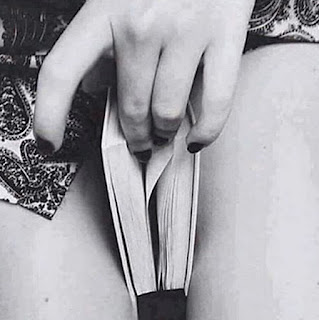 I wonder what sort of books she's into.

Yesterday, I took some time off in the middle of the day to run some errands. I had made an arrangement with the bike shop to drop my bike off so they could do its one month adjustments, even though it has been two months. I called in advance and made sure that they could do it while I waited, and had planned on going to buy the new iPhone or get the screen on my old one fixed. Of course when I got there they knew nothing of this plan and told me it would be a couple days. I negotiated it down to one day and I should be picking up my bike later today.

I stopped by the Apple store but didn't feel right about buying the new iPhone. Phone providers used to subsidize the cost of a smart phone for their customers that were willing to sign a two year contract. Now, they offer the same monthly fees but no subsidized phone and no discount on monthly service. The moron that AT&T had hired to conduct their phone scams had a very difficult time grasping how this did not work to my advantage. No amount of layman's math could convey the idea to him that I will be paying more money now, as the entire cost of the phone will be my responsibility and I'll be taking on an additional $40 a month in fees just to have the phone, where that used to be partially included in my same monthly bill.

I finally had to explain to him that we were done talking. I didn't buy the phone. There are bikes that need to be purchased. Not right away, of course, but soon I will need a carbon-fiber road bike. A nice one. The mountain bike has already paid for itself in sweat and money saved on alcohol. Well, maybe not yet, but soon, probably in another month or so.

All of this resulted in me jogging to the gym yesterday, a thing I have not done in some time. I arrived already nearly soaking in sweat, then did another 20 minutes on the Nordic track, my full regular workout, and then jogged home. I was drenched, but still sit just above 200 lbs. My periodic return to episodic drinking has precipitated ups and downs of weight loss that have kept me just above 200. I'll get close and then I'll start enjoying the occasional glass of wine or more, then a pound or three will creep back onto my belly.

I give it up and I start to vanish again.

I'm beginning to suspect that alcohol and weight are somehow related. Ah well, my legs are just the slightest bit sore today from the short jog there and back. It was just over a mile, both ways, when totaled.

So, today I will buy the most expensive pair of running shoes that I can find. It is how I conduct my consumer impulses: buy something that will guilt me into increased participation. If I can get below 200 pounds then I'll buy a whole new wardrobe, also. It will cost several thousand dollars, but it's the only way to keep the weight off. I'll throw out all of my older clothes and wear women's skin tight exercise apparel everywhere I go. Yoga pants are great for the office and nobody gets to tell me otherwise, etc. I'll drink fruit smoothies and talk to strangers about how my cross-fit regimen has been going, what my next personal fitness goals are, the vital importance of cardio, etc.

People will love me, like the presumably smart girl in the image above. I say presumably because she could be a retard. Sorry, I meant: she could be retarded. If you take the "ed" off of the end of the word it feels different, almost wrong.

Well, that's one of the joys of getting older, the curve of slowly mitigated and age appropriate bigotry. Once past a certain age you can say the word Negro at Thanksgiving dinner and most of the time people will just look away. That is, unless you happen to be at a black friend's house with their family. They'll just laugh at you, depending on context and of course tone.

Why do all of my conservative friends understand the "problem with black communities" better than everybody else? It's as if they're the only ones that even seem to notice or understand what is really wrong with black people, while all the liberals seem to know how to do is to care, which is useless in the grand ol' scheme of things.

I still like to use the word Oriental, but I only use it when somebody is being really Asian about something. They can try to disoriental me but after a few glasses of wine on Thanksgiving at a black friend's house... nobody will really care.

If anybody gives me any grief I'll throw my hands up and beg forgiveness:

What, I'm being Occidental. What did you expect?

Forgiveness must be granted on Thanksgiving. It's the law. Otherwise you're being an ingrate, which just flies in the face of all civility.

If you think I'm being presumptuous here, well... you may have assumed that the image above is that of a female. It's not. It's a man with a 10" kneeknocker cock tucked underneath that book. He was also black if I remember correctly, though he had the softest white skin on his legs and loved to wear patterned dresses and to paint his nails. He said he related to the femininity of it, that it was likely because he didn't know who his father was and was raised only by his rather manly black mother. I suspect that he claimed this only to provoke me because he was a closet conservative, or perhaps because he thought I was being too white about it. You know, an easy target.