Another day, another dollop 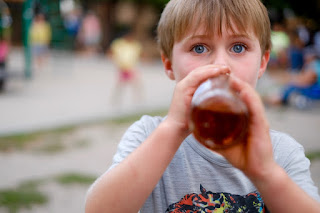 Put cream in my coffee this morning. Little white particles floated to the surface and tried to colonize my cup. I was too tired to care. The facilities team in my office came in a little bit later and threw that cream out and replaced it with a brand new carton. It's disgusting, but what can I do now? I would go purge but I am too often in danger of adopting another disorder. I've been told the eating ones are best to avoid and result in the least sympathy.

Have you ever met an addict of any kind that didn't also exhibit hints of that behavior in their diet? I have. They are monsters: addicts that eat well. It requires an immense inner strictness, a balanced rigidity. It distorts something in a person to only be addicted to specific things. One must choose their imbalanced passions carefully if they ever hope to succeed.

Since trying to lose weight, and doing so through increased exercise and decreased drinking, I've come to terms with a few troubling and recurring realizations. That I am a fucked up guy is one of them. I don't feel that much more so than others, comparatively speaking, but talking about it openly does make it seem so. I don't have to be fucked up, but I don't seem entirely capable of either stopping it or managing it on my own. I am driven by forces that I can neither control nor understand. My only options seem to be to embrace or deny those impulses that define me in this regard.

Then, there are times where it is best to simply obey your compulsions. Why spend your life fighting? It makes little sense.

People will tell you all the time to learn to accept yourself. I guess I never listened, or perhaps they meant something different, at least in my case. I don't think the idea is to accept yourself, at all. If that were true then we would all revert back to the cruel lying little shoplifters that we all were when we were children. Sort of. Accepting yourself is only viable if you are free from interests and passions. A little bit of Buddhism is a dangerous thing.

Or, maybe they only meant "Don't hate yourself..." which I don't.

I've reached a point where I can't tell which version of myself I should choose to nourish, the drinking one or the more clearheaded one. Left to my own devices I'm not the best abstainer, I'm the annoying vegan-atheist-cycling kind. I am good at it, at best, but have a secret compulsion to export my values upon those who have their own. I give in too easily to the temptations of self-righteousness, a state which can only be temporary for any honest drinker, at least when you drink in the manner that I have adopted.

Periodic bouts of shame and guilt seem to be the state in which I am most comfortable. Perhaps comfortable is not the right word, familiar is more close the the truth. Familiarity and comfort seem to be the dividing lines between the states that I most fluctuate. Then of course there is alienation and discomfort. The other sides of the other coins, which somehow result in the coin tosses always needing to be done over, to verify.

Shame and guilt, augmented with delusions of force majeure and aspirations of force raconteur. Now that is a prescription for writing. Or, a certain kind: confessional. I daily choke confessions out of myself a' la French Connection.

Speaking of, I was going to try to fit a delusions of voyeur in there, as I do like to watch women getting dressed. That is perhaps a secret best kept close.

Don't tell. It'll be our next little secret. A sort of French Confession.