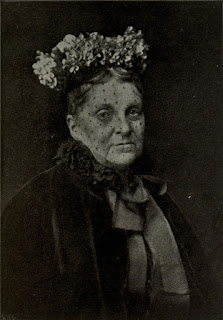 (The Witch of Wall Street)

Death is everywhere and for all time. I recall the memory of death's foreignness when I was a child, that it was somehow an unusual event - something rare and ominous, something not to be touched. It isn't rare. It was only hidden, nearly as quotidian as birth, celebrated in inverse. It is the standard by which most lives are measured when a certain quality of living is assumed. Then, there is the quantity by which we all nod our heads in approval or disapproval at the other having had their fair or unfair shake at it. Anything over 50 is sad but not as sad as dropping out before. Anything over 70 is accepted. Anything under 20 is horror, whether sudden or predictable.

The only thing more pathetic than death is outliving your money. I shudder more at the idea of outliving my life. We discuss death of the wealthy as if the notice was printed in a special supplement to the weekend newspaper. Any fool can work their way into the obituaries.

Yesterday, my brother told me some news. The son of my father's wife, gone. Does that make her my step-mother, still, even if my father is dead? She was never really a mother to me, just the wife of my father after my own mother passed. Can we just call the family thing off, now that my dad is gone.

Just. What an awful qualifier in just about any sentence.

I was never that close to her, though I had no problems with her at all. In fairness, my father did wait two weeks after my mom's passing before he married her. She just did not interest me very much. Most people don't. My father didn't interest me very much either, until towards the end. That may have been my fault. My interest in him was probably selfish. If he were not my father than I might not have ever noticed him. He was a good guy, he just lived by different principles than I have, perhaps ones that were more agreed upon among a certain type of person. Or, maybe we were both just certain types of people. Just.

I do miss him sometimes. There is the recurring sigh of love in that. He must have missed me from the age of about 12 onwards. We each might have carried some regrets, held aloft by the load-bearing lies.

Well, I woke up thinking about it, the death. There was a head injury, then a spiraling into drugs and alcohol. Pain killers will be blamed, of course, and perhaps that is where the blame should rest. You know, the Big Grim Pharma.

The last time I took too many pain killers I also pondered the dying. In some mid-morning delirium I remember trying to tussle the terms of my own, sent some cryptic texts and then went to sleep. It took days to decipher the possible meanings of my messages, or even to find all of them. The pain was clear enough, perhaps too much. Nothing quite aches as does loneliness. You lose a leg or an arm or heart or two but can still feel them itch, everywhere. Phantoms can neither be stabbed nor scratched. You can kill off the senses, the air in the room remains. One must treat heavily the mind and body to blanket the symptoms, which then justifies their continued treatment. Some people have never felt it. You know because they insist upon its cowardice. Only the strongest of souls can muster the courage needed to openly accuse the suffering of others.

All of this specialized medical knowledge I give away here freely, without apparent head trauma.

There are many things worth mocking and Death is the best. The gesture is empty of course, at first. Death can not be ridiculed with adequate cruelty for it to matter very much. It's impossible to get a response, until it becomes quite easy. It can be stolen from but not for long. Death is just, if nothing else.

It is no surprise that people are so selfish in life. They perhaps know something that I have fought to ignore: You can't take it with you. You might as well hoard it while you're here. The only thing a miser can't hold on to is the secret about who they are.