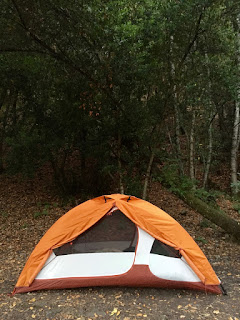 Well, the boy and I successfully camped, finally, after several failed attempts.

Midday Friday, we decided to lounge at the pool for a bit then head up into a nearby mountain for the night. The boy was ecstatic. We found our spot and set up our tent. Shortly after that - luckily not too much longer - another family arrived and informed us that we were in their spot. After some investigating and pointing it turns out that they were quite correct. One of the fathers helped me move our already setup tent over to the correct place and we all proceeded to become fast friends, sharing our firewood, camping gear, and the food that we were making.

I had gone full-American and was making cheeseburgers and baked beans. The other family was Indian, so they opted not to eat any beef-thing that I had prepared. Ah well.... I kid, of course. I offered them none of what I had made. They offered plate after plate of delicious Indian food - goat meat with basmati rice, spicy chickpea patties, delicious sauces and fruits, etc. I offered to let them use a grille basket I had to heat the chapati and naan they had brought. These are just guesses on the bread. There are probably a thousand varieties or more that I am not familiar with. After this we were all quite pleased to eat the evenly heated bread together, which was a wonderful and unexpected camping surprise.

They had three boys all about Rhys' age. He was off and running and having adventures with them, venturing into the nearby trees to enact some playful version of danger and heroics. I almost started to feel a little robbed, that the boy was ignoring me and our camping setup to play with the neighbors' kids, though I have learned slowly that it is best to just let things happen as they normally would for a four year old. Their lives, like most others, are happiest when they are being left alone to do as they wish. You can not correct a child into happiness, you can maybe guide them towards safety, then hope for the best.

Being a parent has a corollary in vegan ethics, you simply wish to reduce suffering, though very specifically.

Later, as he and I lay in bed awaiting sleep to arrive he asked me why other kids get to stay up later than he does. I tried to explain that different aged kids go to sleep at different times and that those kids were a little bit older than him, which was true, though the more telling truth is that dad was tired and ready for sleep.

He loved falling asleep and waking up in the tent, under the trees, beneath the stars above that.

In the morning, we made eggs and had fresh fruit. Dad drank a Starbucks mocha thing in a bottle, which seemed to be some form of coffee but without any of the positive gain in energy. It did very little to raise my blood pressure, either, so I washed it down with a Red Bull whose effects were far more pronounced and perhaps cumulative with the other. I don't normally ingest such poison in the mornings, I promise.

Necessity is the mother of ingestion. 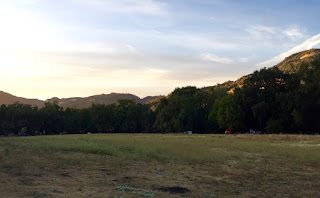