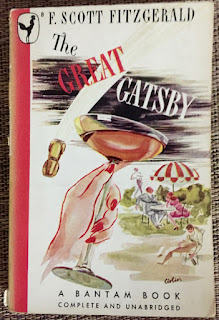 For Daisy was young and her artificial world was redolent of orchids and pleasant, cheerful snobbery and orchestras which set the rhythm of the year, summing up the sadness and suggestiveness of life in new tunes. All night the saxophones wailed the hopeless comment of the "Beale Street Blues" while a hundred pairs of golden and silver slippers shuffled the shining dust. At the gray tea hour there were always rooms that throbbed incessantly with this low, sweet fever, while fresh faces drifted here and there like rose petals blown by the sad horns around the floor.

When I can not sleep I'll sometimes pull a book of of the shelf and flip through, looking for a passage or phrase that jumps out, or for those that try to stay hidden. Last night was Gatsby, a book that I haven't picked up except to move from place to place in some time. Any page will make me stop flipping and draw my eyes from line to line.

My old copy was purchased used and has the underlining of another. When books are read this way - without knowledge of the previous owner or owner's gender - it is fun to try to guess, to see what is significant to the eyes of another reader. It gives the reading a lopsided emphasis, as if you are not alone.

Jordan Baker instinctively avoided clever, shrewd men, and now I saw that this was because she felt safer on a plane where any divergence from a code would be thought impossible. She was incurably dishonest.

CS reminded me that none of the women in the book are meant to be liked, but neither are the men. Nick Carraway is the character with whom we are meant to align, if at all. He, at least, has enough sense to stumble home, to collect and narrate his thoughts. Pulling us away from the party, then back into its aftermath. As safe from the coasts as the midwest itself.

The descriptions of the carnivalesque jazz fading into the night are a part of why we are there, as if a hundred-headed monster is dancing next door in darkness.

The book is a natural magic.

"What part of the Middle West?" I inquired casually.

I should re-read Tender is the Night. There are few things more beautiful and sad, none in that way.
The idea that I have time to re-read things shows how luxurious my life has become, as if there were nothing left but time, so none of it matters.

I realize now that under different circumstances that conversation might have been one of the crises of my life.


The lines that I have nearly randomly chosen here are not meant to be part of this post any more than my own. They were all underlined in my copy.

I am disjointed and have been up since four score and seven hours ago. I drank a pot of coffee. All that it has accomplished is to have made me nervous on an empty stomach, brittle at any pace.

He had passed visibly through two states and was entering upon a third. After his embarrassment and his unreasoning joy he was consumed with wonder at her presence.


What menace, the romantic dream.

My life has been an attempt to test my own love. To prove it worthy, I do not let things end, as if longevity grants it greater value.

To determine if I am loved by those who make the claim I have pushed them past where I might have otherwise, beyond what could be considered fair by the rules of the game. There were some who once adored all of the pulling and the pushing, though took none of the blame for having done so themselves.

Love forgives everything, except maybe the shame of remembered joy.

A universe of ineffable gaudiness spun itself out in his brain while the clock ticked on the wash-stand and the moon soaked with wet light his tangled clothes upon the floor.