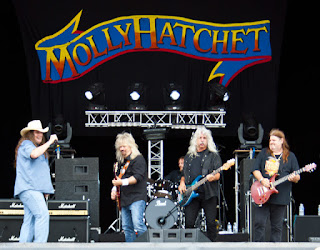 I woke up with bits of The Ramone's "It's Alive" album playing through my head. It's no wonder I'm so fucked up. I don't even like The Ramones. They're the Molly Hatchet of punk. I mean sure, I get it, they are somehow important, but fuck... so was World War II, and WW I, and 9/11 I'm told. I'm just supposed to take everybody's word for it? This is how Heroes are made.

If you ever hear anybody ask where are the heroes now? then just tell them we need a new 9/11. That should resolve the remaining conversational nonsense, but it won't.

Whatever national crisis occurs next I propose that we send in Molly Hatchet, maybe prep Ted Nugent to provide backup crossbow support. I have often wondered how their flirtation with disaster panned out for them.

Now we know: they got hitched.

I had to explain to a close friend the other day that The Replacements were not The Lemonheads. It was dispiriting. I thought to myself... if he and I can be friends for all this time and there is still any lingering confusion about a band like The Replacements then I have failed. I haven't been a very good friend.

I used to make collections. Single disc "albums" on the subjects of my choosing, arranged carefully for the enthusiastic music listener, though perhaps for those that are novices on the subjects in question. The intention was to introduce my friends to artists whose catalogs did not allow immediate access to their work. I would revel in the unapproachability - the electric Miles, odd electronics, Bowie's obscure stuff, Krautrock, Prince, Country, and even once there was Neil Young. I'm not an historian, but there were just too many bands and genres that didn't exactly invite new listeners, and their compilation albums were failures thrown against the record label wall by executives who hardly gave a shit.

I was different, and determined.

Fuck it. I also used to print out sheafs of my poems and give them to friends, so there is that... I was just a kid. I didn't know any better, and didn't get everything right on my first run.

I'm tempted to put a lot of work into a new collection of music now and only give it out on cassette tape. That'll teach people to mock me. Better yet, 8-track. Or, one copy and that will only be reel-to-reel. I'll call it "Scotch," after the magnetic tape, of course, or a reference to the semi-autonomous country from whence the delicious brown liquor arrives. In my heart that magical place will always be the free and sovereign: Scotchland. They should build a Panama Canal along their southern border with England.

I get it, I'm hardly holding on to anything here any more in terms of topical coherence. It's all falling apart, like the moment that you accept that you're tripping too hard. You sit down and try to give up, but no.

No, that doesn't work.

Was I different? I sometimes wonder how that worked out for me.

Being unique is hardly a value that can be effectively encouraged. I worry about it when I have nothing to read and only a phone in my hand. The best examples are a click away, which is too close to be useful. Maybe it was always that way, but did not seem so in the young and dawning Orlando that I knew. I want to believe that there is a vital difference between shopping for weird books, then reading them,  and clicking on your Facebook friend's weirdo links, but my wants are increasingly anachronistic and perhaps my perceptions only aligned with different times.

Weirdness used to be a secret. It gets too many Likes now, makes weirdness impossibly accessible.

I've given up, I guess. I'm akin to a drag queen that has let themselves go. Pale fat has coalesced around the line where my pantyhose strictly meets my abdomen, my lipstick has performance smears, my hair a mess. I need new Spanx. It is all unsightly, this slow accretion of flesh, but the show must go on. I only wish that I hadn't made a career out of the harsher side of strip-tease. It was a youthful indiscretion, this brutal burlesque, and one that I now seem stuck with. Dedicated fans of form become insufferable. I mean myself, of course.

I really should buy some fresh underwear. It could be a write-off.

Panties as they are called in the biz.

Listen readers, I agree with you, this is a crisis in writing. You know that, I know that, but maybe we should disagree on what can done about it. It's easy to just say "fix it!"

Anybody can say that, I just did.